Frøydis Sollid Simonsen on her love of reading, writing and especially of pencils!

Frøydis Sollid Simonsen is a Norwegian, living in Copenhagen, Denmark, and going to Comics School in Malmö, Sweden. She has been writing since she was able to, and drawing since she accidentally attended an art school. Her first book, a mix between short prose and a novel will be published by Gyldendal in Norway the 27th of August. 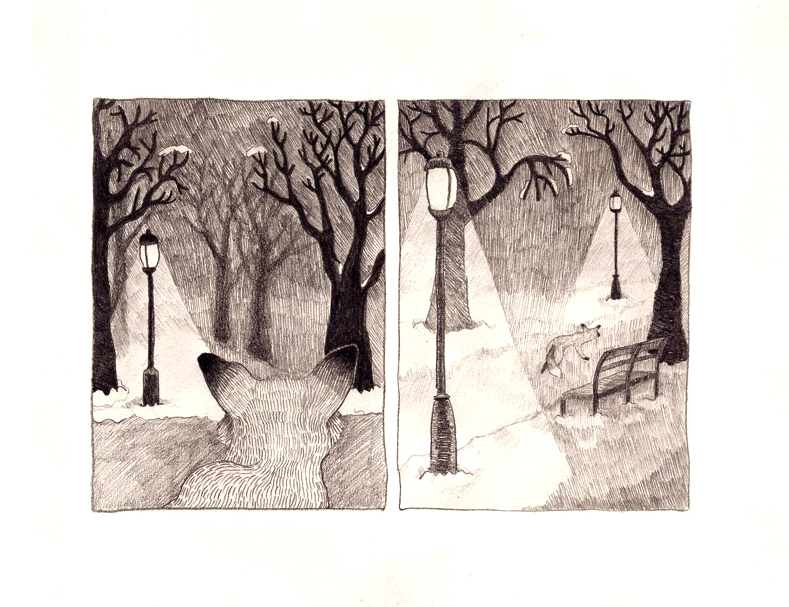 I didn’t really draw much before I started art school when I was twenty. I had just finished a school of creative writing, and my main reason for going to art school was that they didn’t give you any homework, which attracted me. I had this idea that I would go there and draw during the day, and then go home and write in the evenings. Which is ridiculous of course, art school was a lot of fun and I really worked hard on learning how to draw. Sometimes I feel like I almost succeeded.

Actually I only use one type of pencil, so I’ve bought a lot of that one to keep in a drawer. The one and only is a Staedtler 2B, you know the blue ones? I took it out to look at it now and it says Mars Lumograph on it as well, does that mean anything? Anyway, that’s what I use, it’s perfect. I like how it feels in my hand, I like how it responds to how I draw, and whenever I try any other pencil it’s just not the same. Sometimes, just sometimes, I use a mechanical pencil of some sort or other, or a Staedtler 4B or 6B. 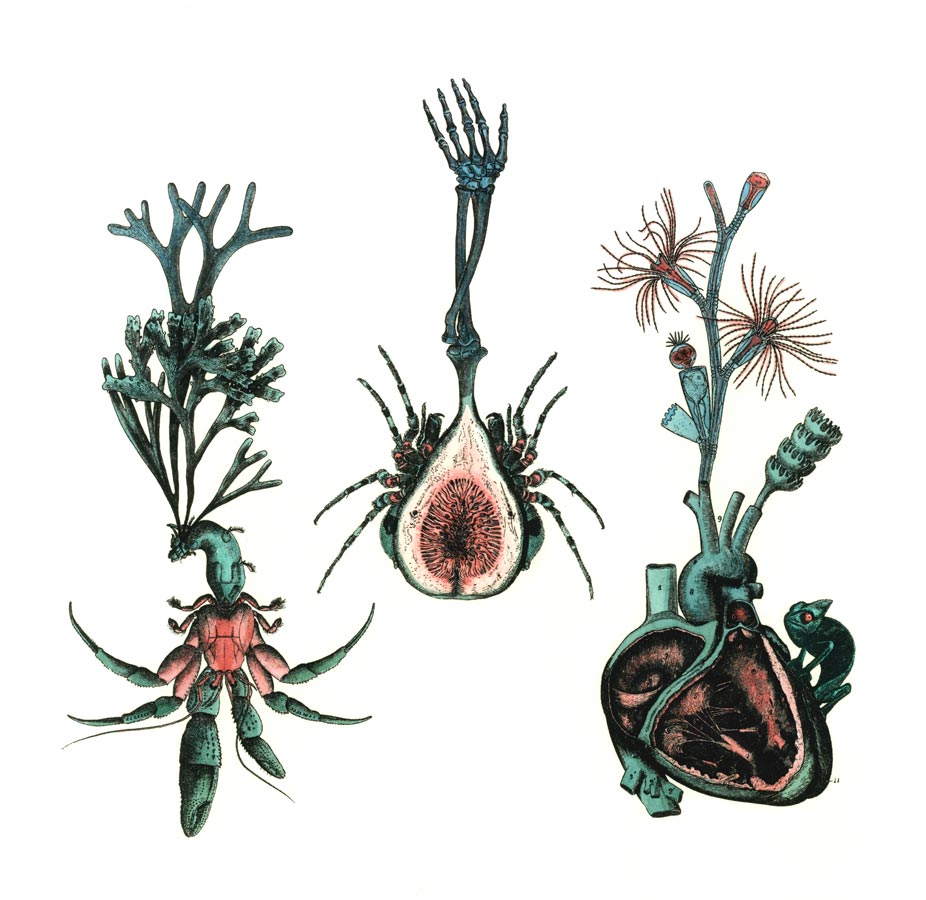 I love that it’s a medium that feels so alive, that one pencil can have so many different expressions depending on how you use it. I love working with pens or brushes , but I often prefer the pencil because it feels like it’s the closest to thinking.

I usually sit down and write first. Words predate images in my mind, and I often feel like words express what I want to say more accurately than images. So I sketch out some sort of idea using words, and then I write around and within that idea and usually I won’t start drawing until after I finished writing. Then I do some sketches, witch is the hardest part, and then I do the finished work. I think it’s both a good and a bad thing, because sometimes I can’t get enough space between the images and the text, so they can both breathe. Right now I’m working on a comic where I do the drawings at the same time as I write, it’s the first time I try and it’s interesting.

Can you specifically describe the role of drawing in your process?

Drawing usually comes last. When I’m working with an idea, I find words easier and faster to work with. I don’t, like a lot of people seem to do, use drawing as a springboard for ideas and new ways to create. I imagine how it will look, and then I draw it, usually with only one, or no sketches before the finished product. It depends on what I’m working on of course, sometimes I make tons of sketches, but I like to keep some spontaneity in the lines. 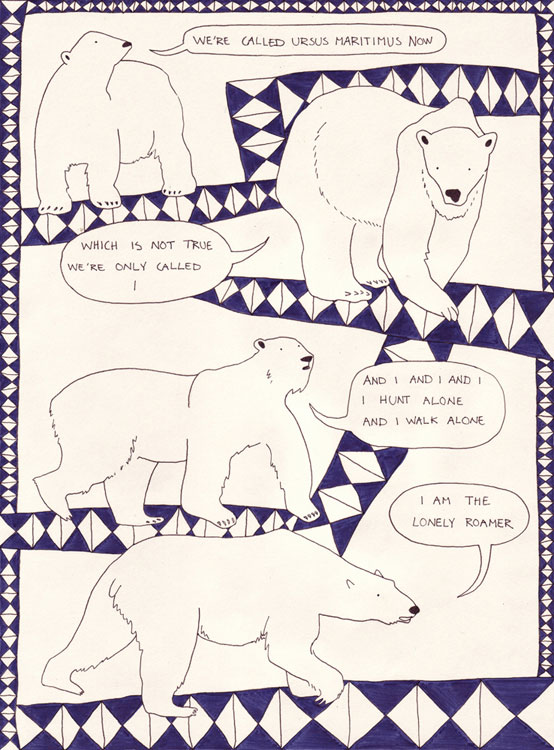 I don’t know if I have one such photograph, but I love looking at pictures taken by the Hubble Telescope. They’re so beautiful, and I can’t help but think: Wow, this stuff actually exists! It’s not made up, it’s out there somewhere.

I went to the Animation Film Festival in Annecy in June, and I haven’t been to the cinema since, so the last film I saw in the cinema was the last screening they showed (outside by the lake and the mountains!), of the winners of the short film competition.

I don’t really sketch that much, especially not outside, so I wouldn’t know.

Cities, I feel that cities are really great, right now I’m really into cities. How they work and how they’re structured. It seems to me that most cities are awesome in different ways. They’re all filled up with people and people’s lives and the interactions of those lives, which is great. Do I have to choose one? Copenhagen, maybe, that’s where I chose to live. For the time being at least.

Your work has a strong literary influence – either in possessing an actual narrative – or in it dealing directly with literary themed subject matter – not to mention, maybe being inscribed on actual book pages.  Are you having a love affair with the printed word?

Oh definitely. My dad used to tell me when I was a child that I should go outside and play instead of staying inside and read all day, otherwise the sofa would become shaped after my back, or my back shaped after the sofa.  So I took my book outside to read. I still love reading everywhere, in parks or at cafees, or at the bus, train, metro. At the sidewalk while waiting for someone. In my bed. In my armchair.

Can you talk about the use of creatures in your work?  Is fair to say that most of the mammals that put in appearances are indigenous to your part of  the world?

Yes, I guess they are! I never thought of that, actually, but now it seems obvious. These are the mammals I know the best – through folklore, science TV-programs and even the local news. I guess that’s why I chose them. And I like to draw animals, they have such nice shapes. 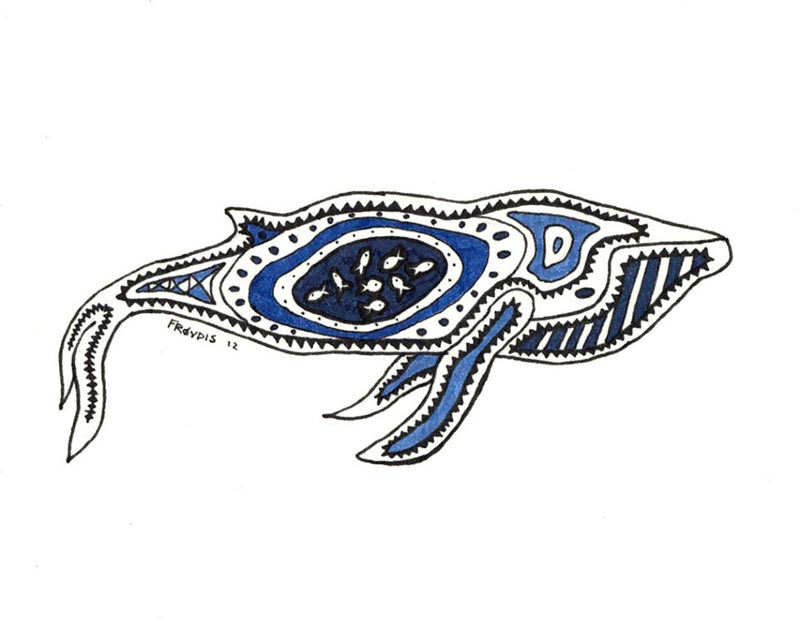 I have too many books on my bedside table. But here goes:

The Professor and other writings – Terry Castle 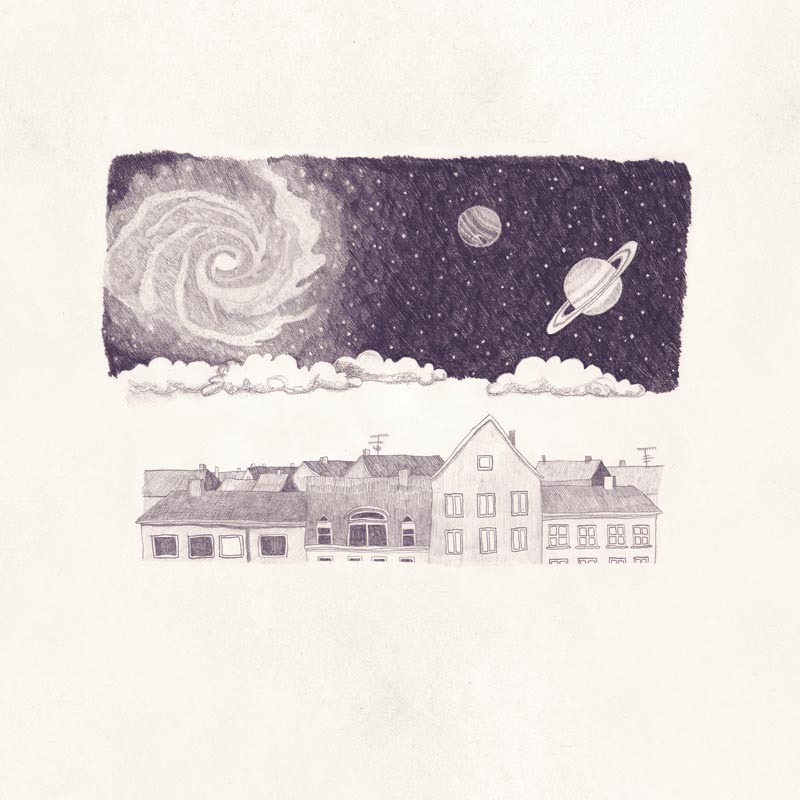 What is your favourite novel?  Would you illustrate it?  Create on it physically? Depict the narrative in mixed media?

My favourite novel? Tough one! I would have to name several, otherwise it would not be fair. I think it would have to be (could be / might be / are right now): Gravgaver (Burial Gifts) by Tor Ulven, Autobiography of Red by Anne Carson, Even Back Then, the Fox Was the Hunter by Herta Müller, Kapten Nemos bibliotek (Captain Nemos library) by Per Olov Enquist. And no, I don’t think I’d want to illustrate them or do anything with them (except reread them), they are already perfect. But they have had a huge impact on me and how I write and create my own work.

I always listen to music or podcasts while working! While writing this I’m listening to Memphis Slim, right now I’m in a period of rediscovering my old blues-favourites from when I was a teenager. But it’s not so good for when I’m working I think, so before that I was listening to Emancipator and Blue Hawaii, both of which I discovered two days.

Yes! I keep several. I carry one around for drawing and writing down ideas, or just stuff I see that I want to draw. And I have two or three notebooks for different writing projects, and I also keep a sketch book for when I go out drinking. I love drawing people when we’re talking or when we’re drunk. Other people seem to love it too, I let them draw in it. 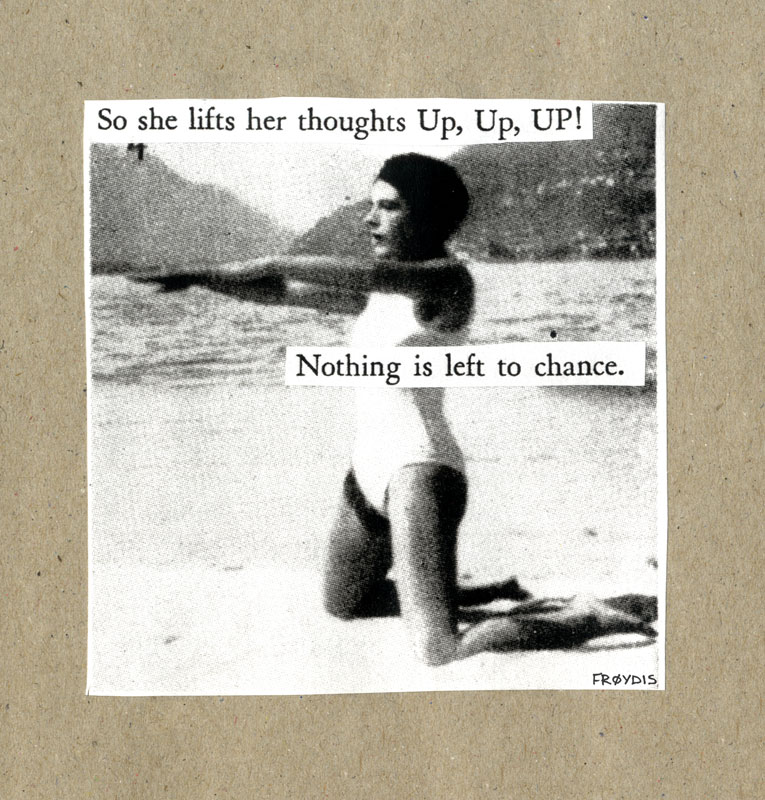 I don’t really have that many early memories of drawing. I drew a lot as a child, but one specific memory… I remember being jealous of my three year younger brother when he started drawing, he had this impro style where he drew abstractly for hours and hours, and I wasn’t able to do the same. I’m still not able to.

The subject matter of your work has a large range.  What has been your favourite creation thus far?

My favourite creation? I guess I should say my book, it’s definitely the one that I’m the most pleased with. But maybe I should answer: The first real comic that I made, called Farmor. It was in 2008, and it was the first time I really felt that telling a story, and the kind of story I wanted to tell, was possible (and maybe even preferable) to tell with drawings accompanying the words, instead of only words. I think that that comic is where it started, so in that way it’s one of my favourites.

During the summer I have a place at Kulkælderen studio in Copenhagen with some rather awesome people, where I’m working on a comic for the Flamme-blog (in Norway) about where to go and what to see in Copenhagen. I’m trying out ink and brushes, it’s fun! I’m also working on a piece for an anthology (also in Norway), all in pencil. And I’m making a small exhibition of collages on the theme of biology, for the launch of my book when it comes out in August. 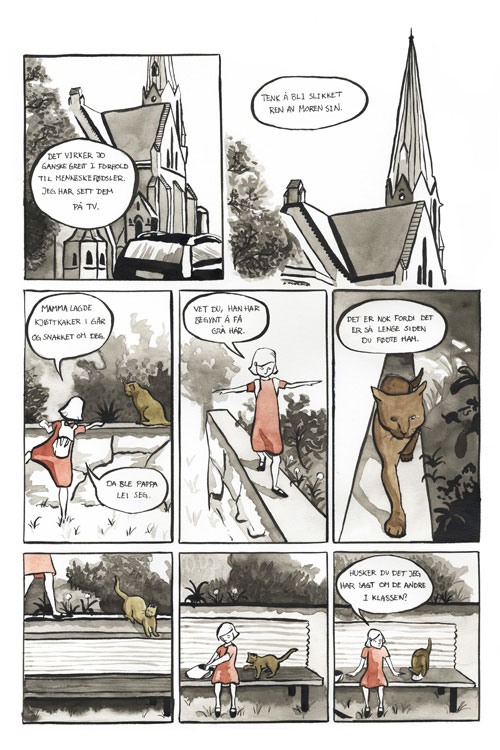 In August I’ll start the Project Year at the Malmö School of Comics, and I applied with two projects. One is a children’s comic, which will be very interesting I think, it will be my first long comic. The other project consists of small science-inspired comics about space and the universe, and I think I’ll try out a different style in all of them. Other than that – I would like to explore other ways of mixing text with image, I have this idea of writing new book where I mix the text up with images, maybe collages. But that will probably have to wait a year until after I finish school.

I have two fanzines that I sell at comics festivals, and if you want one just write to me. After the 27th of August my book can be bought in bookstores in Norway, or on the net. But these are all in Norwegian, maybe I should make English versions of my zines? I’m also a co-editor of the C’est Bon Anthology (all in English, I swear!), and I’ve had comics in the last two issues. I will also be in the next issue of Fett (Norwegian feminist magazine) and the next issue of Forresten (Norwegian comics magazine). 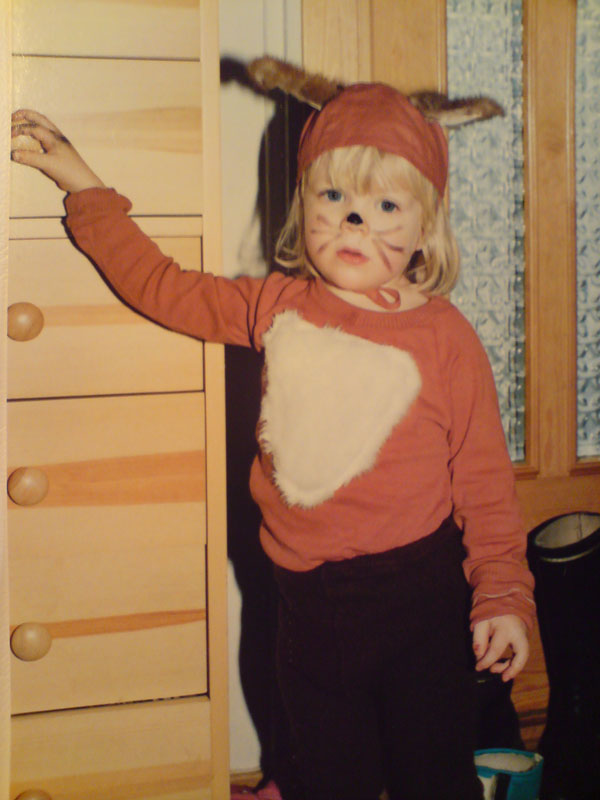