Lee Misenheimer on learning to draw from the babysitter, the rhythm of pencil lines, and lunchtime sketches.

New York-based illustrator Lee Misenheimer draws inspiration from Eastern mythology, monsters and demons. He graduated from the East Carolina University School of Art in 1994 and has since produced a solo show at Lump Gallery, Raleigh NC. His work has been featured in Juxtapoz, Ape on the Moon, and now Tiny Pencil – he drew the striking cover for Issue 3: The Beast Issue! 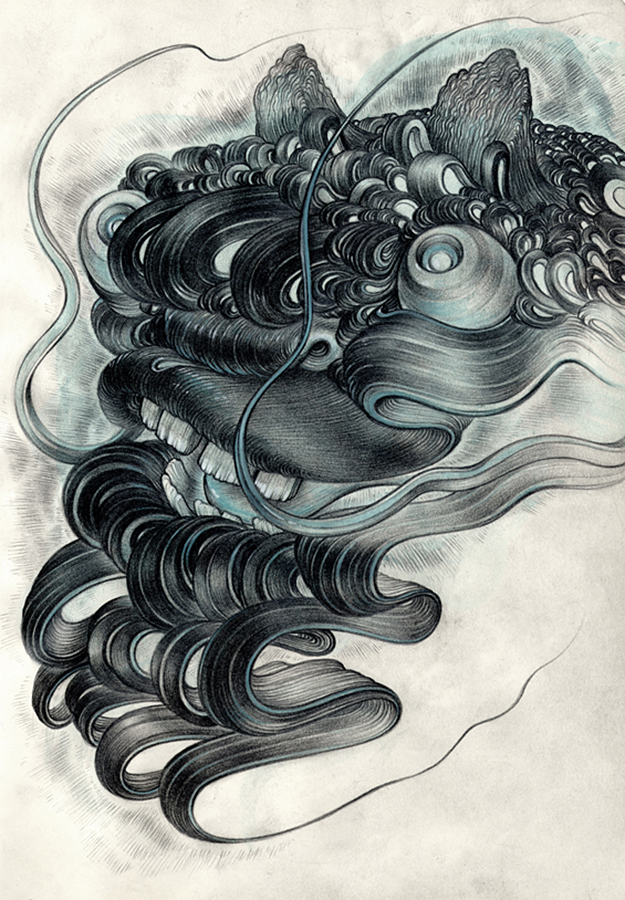 Could you tell us a bit about yourself and what you do?

Hello, my name is Lee Misenheimer. I live in Brooklyn, New York. I like to draw.

I’ve always drawn from as far back as I can remember. The earliest are being completely fascinated by a babysitter’s sketching. She always seemed to be doing art homework when she was watching me. I also remember drawing with her, trying to emulate her techniques. I would try to recreate her ink and brush techniques in my crayon work.

Tell us about your creative process, from the initial idea to the finished piece.

Eh, it’s pretty random. Sometimes it just starts with a line and then something just comes from that. Other times it’s “Oh sh*t, I agreed to a show…” or some other deadline. It just forces me into exploring and getting a piece going.

I’ve just always gravitated towards pencil, even from a very early age. 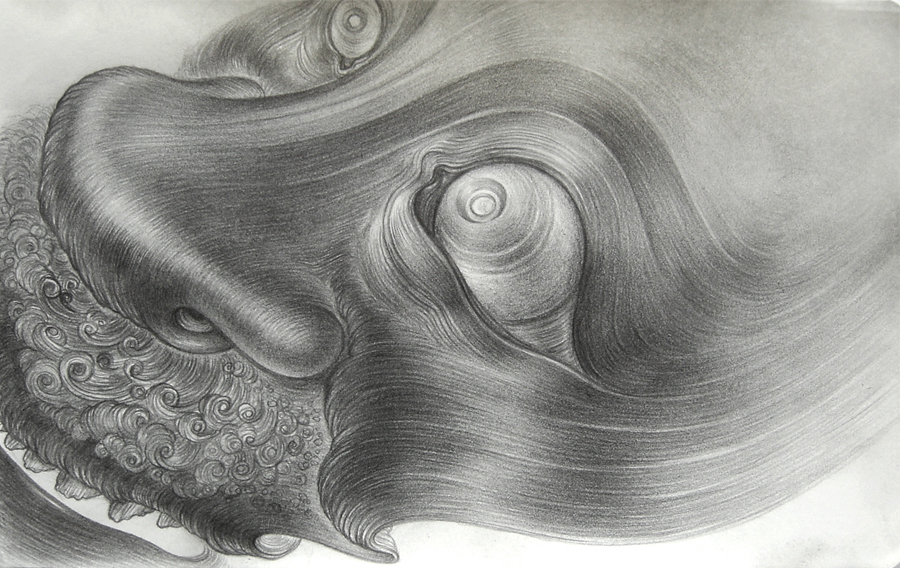 Your work features hundreds of lines built up to form beautiful layers. How did you develop this particular style?

I think it just developed after a long three to four year break from art. My work used to be more quick and limited in lines. Now I feel I need to sculpt the lines. It just kind of got worse from there. It’s meditative for me: I call it a thumbsuck.

Are those lines built up from a particular rhythm?

I think sometimes I try to capture the essential shape of some of my faces or creatures in one initial motion and then build upon that framework.

Do you have a favourite pencil? Wood? Mechanical?

Mechanical. A variety of sizes from .03mm up to 2mm. My fave at the moment is a good old 0.5mm mechanical pencil.

For any subtle coloring I use gouache.

What size do you tend to work at? Do you have a preferred scale?

Most pieces are smaller, 8×5 to 11×17, or in and around that range. Occasionally I’ll go big and make something that’s upwards of 50×40. The larger scale is interesting but problematic within my studio environment. It’s hard to store big work. Even harder when it’s framed. I also live in my space with my wife who has her own creative work and now, the addition of my 10-month-old son. 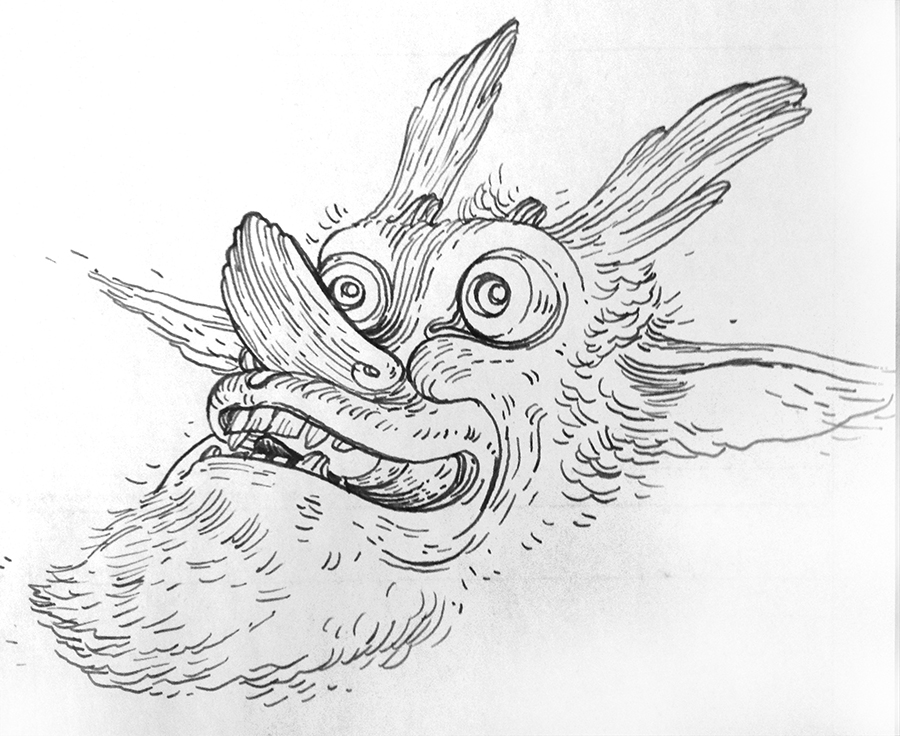 There are a lot of mythology themes that seem influenced by South East Asian culture, especially with the dragons you drew for our cover. What’s your personal tie with this culture and its styles?

I’ve always just been fascinated with this kind of material. Not sure why I was initially drawn to it.

How long does it take for you to finish a piece?

The smaller stuff is usually [completed] in one sitting. The larger works can sometimes take up to seven months maybe. It varies and sometimes I’ll have numerous pieces going at same time.

Japanese art. The work of my friends. Music. 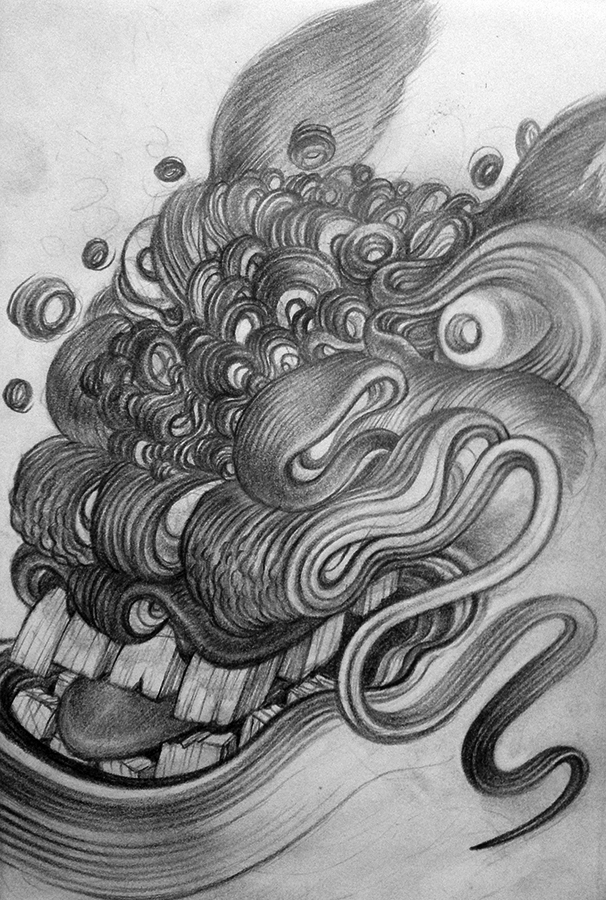 I think the run up to my first solo show at Lump gallery in Raleigh NC back in 2010 was my favorite creative experience so far. I just felt like I was on a roll creatively. It just feels good when you are focused and things seem to be flowing. Even the terrible stuff I was making was positive. I was just in a good creative mode during that time. It sucks that it was almost four years ago. But hopefully more of that is to come.

Are you a morning sketcher or a night owl sketcher?

Night Owl. But also the occasional lunchtime sketch. I need to sketch more however.

Right now you can really only see my previous work via destroyrockcity.com which links over to Flickr. Also on Instagram (@leestroyer) I occasionally post new work.

Prints are in the works. As is a new site which will feature new and work in progress. 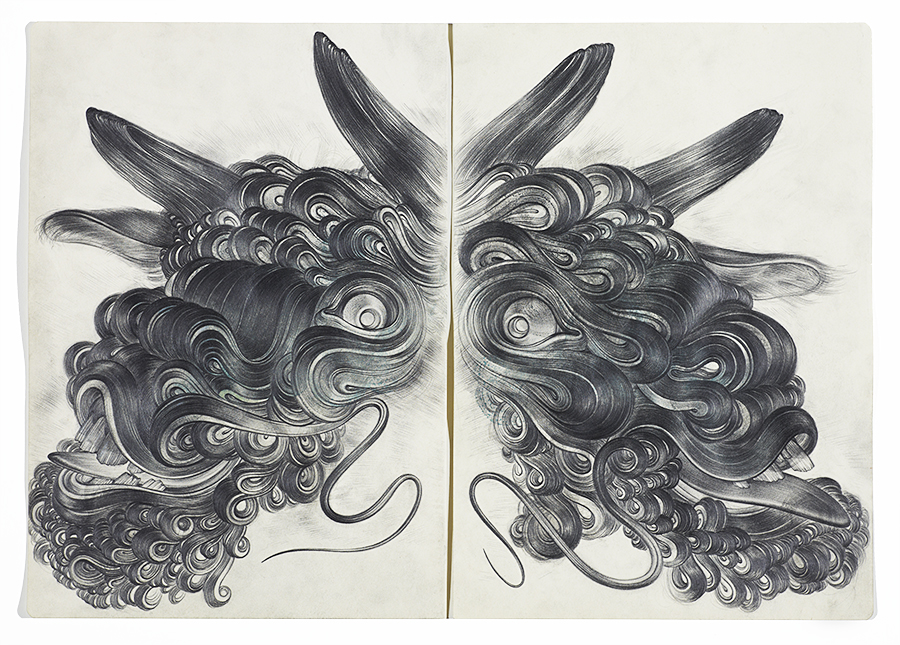 Hmmm. It’s been awhile. I usually avoid the cinema lately so I don’t end up murdering annoying movie-goers. But I saw Prometheus in IMAX 3D during the middle of the day with only about 12 people in the theatre. Looked amazing, but kind of a terrible story.

None. I’ve been doing all my reading via iBooks on my iPhone and I do most of my reading during my subway commutes. The last book I finished was Mona Lisa Overdrive by Willam Gibson.

Lee’s work appears in Issue 3 of Tiny Pencil: The Beast Issue… Monsters, Machines and Unnatural Things! Available to buy here. This interview was brought to you by The Tiny Pencil – fine purveyors of the pencil arts.
Follow us on twitter @TheTinyPencil, Facebook, Tumblr, and Instagram for the latest news on all of our new anthology artzines.