Animal Battles and Adult Babysitting… the illustrations of Maryanna Hoggatt

Maryanna Hoggatt is an illustrator who was born in the Philippines, raised in Arizona, and moved to Portland, Oregon in 2007. 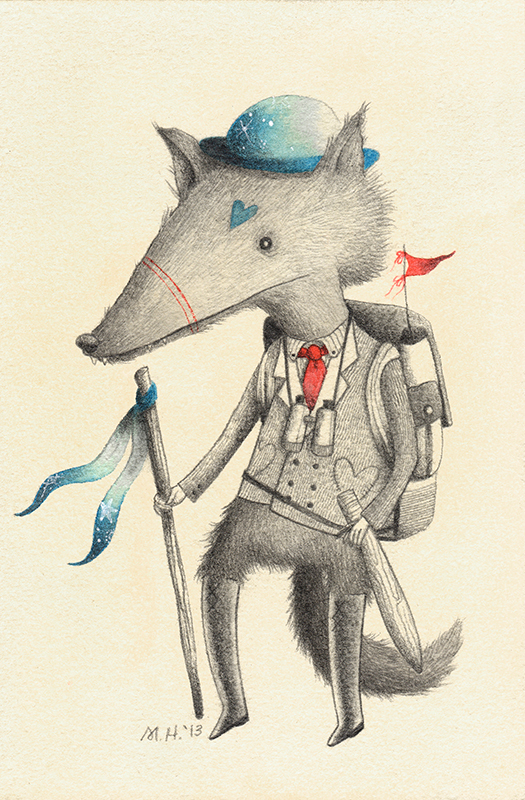 I’m a Navy Brat that moved around a lot when I was a kid. The only common thread was my constant drawing. In elementary school I drew Disney and Looney Tunes characters and made up children’s books in spiral bound notebooks. In middle school I drew a classmate’s campaign posters with Taz. Then later, my first real job: this kid hired me to draw the cover of Snoop Dog’s first album, Doggystyle, for $2. He went way beyond Net 30 but eventually did pay me in change. I came to Portland for art school, but I eventually dropped out. Having no disillusions about the cost of art school and the value of an art degree, I knew I had to find my own path. I took some detours, shortcuts, and a few wrong turns, but now I’m doing what I love full time: painting fuzzy animals, all day long.

Pencil drawings are enchanting and have a special soft quality you just can’t get with any other medium. 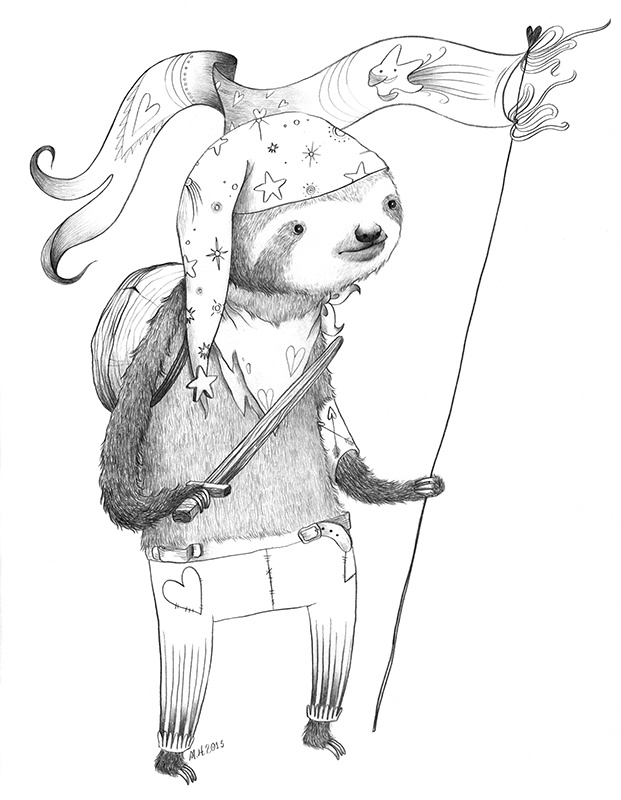 Charcoal, Ink + Brush, Watercolors. Years ago I was strictly an oil painter, but after exploring other mediums, I’m ready to go full circle and break open my box of oils again. 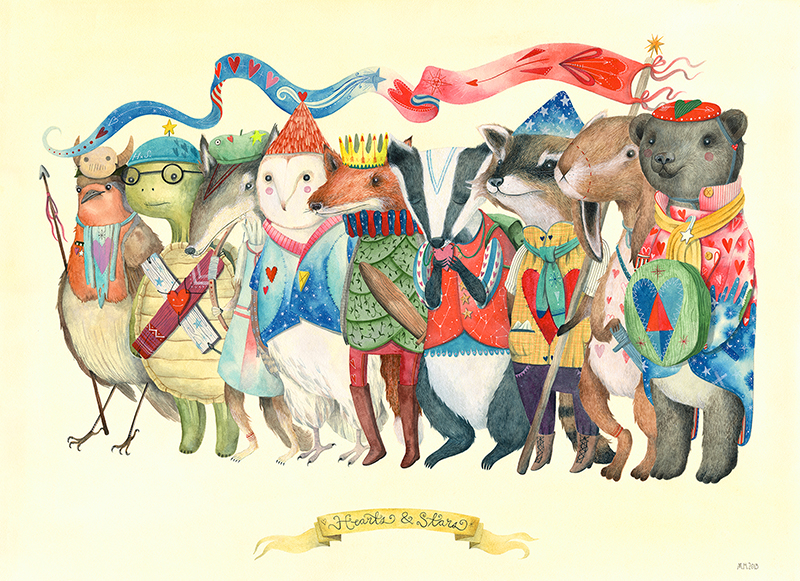 What’s the story behind your fantastic ‘animal battle’ series of illustrations? Did you start creating them with the idea of eventually turning them into a book or a comic, or was it just for fun? …I know you had an exhibition of them earlier this year, how did it go?

I was sitting at a comic convention a couple years ago and started cartooning these animal soldiers. They were fun, but rather violent and superficial – there was nothing to it, just doodles. I put the idea away, and almost a year later, I built a narrative around this concept and created a few rules to abide by when drawing each character. First – no violence. Secondly, all components of each animal’s costume is handmade from things found in nature – mostly wood, leaves, and cotton. No guns, no firepower, no metal.
Next, I had to ask myself what they were fighting for. I wanted it to be a noble battle. I decided to make it a symbolic fight that takes place in the mind, and created two armies: Hearts + Stars, and Eyes + Hands. The first represents our mental tools – imagination, passion, courage. The latter represents our physical tools. When the two forces collide, a Knight of Idea is born. You see, those two armies actually work together to create the real heroes of the battle: our brilliant thoughts, our good ideas. So who are they fighting? Our biggest Enemies, Fear and Doubt.
The best part for me is deciding what characterizes these soldiers – what are their army colors? If Fear was an animal, what would it look like? What kind of symbols would it use that I could incorporate into their fabrics and banners? I knew when I started that I would be exploring this concept for a long time. I mean, there’s just so many animals to paint! Not to mention, habitats, battle scenes, and more. When I debuted the first Animal Battle pieces at my solo show this past May, the reactions were immediate and warm. And kids love it, which is wonderful.
My only plans are to keep painting and exhibiting, and hopefully one day make a book. A dream would be to see these works animated.

You created two comics ‘Adult Babysitting’ about your experience of working as a bartender… I think anyone who’s worked in customer service will understand the appeal of getting all those crazy stories onto paper! How did you approach the project and what did you enjoy the most about it?

Before, during, and after college I worked in the service industry. Over a decade, collectively, and the last 6 or so I tended bar at the same Portland joint. Sketchbook comics of my personal experiences eventually led to a whole book of bartending comics, and then another. There were just so.many.stories. And they’re hilarious! I would laugh as I drew. The most enjoyable part was meeting other people in the service industry that read the comic and were like “YES. THANK YOU.” We are all in the same rickety boat in choppy waters, and it’s nice to find something you can
identify with. Being a server/cook/bartender will change you. 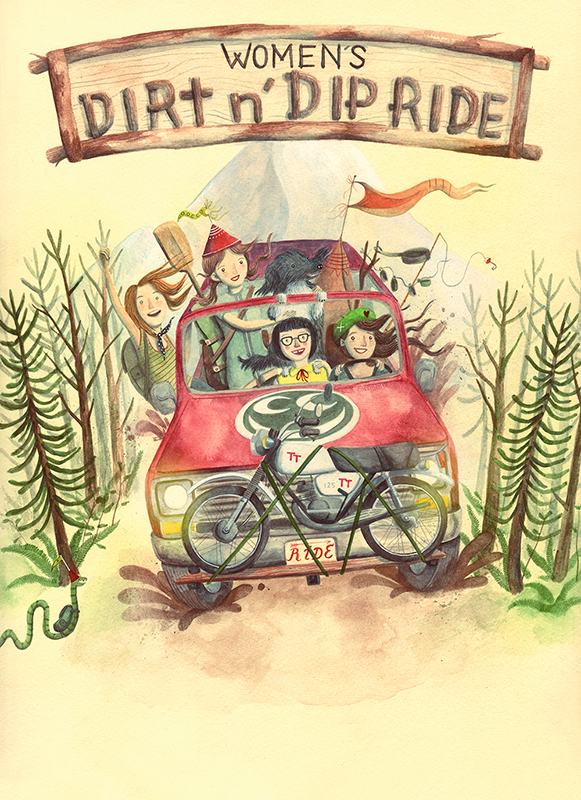 Do you have plans for more comics in the near future?

I actually had a third volume of “Adult Babysitting” all plotted out. Then “Animal Battle” happened. There’s a dichotomy between the two which makes it very difficult for me to split my creative energy. One is drawing stuff that already happened, churning out panel after panel of ink cartoons. The other is exploring a fantasy that I made up through highly detailed paintings. Honestly, I love painting so much more. I don’t know if I can return to the comic any time soon, but I hope to.

You’ve recently gone full-time as an illustrator… is there anything you’ll miss about your bartending job or was it just a total relief to get out?

Yes. Cash. Wads and wads of cash. But I do what I love now, and I ain’t ever looking back.

What field(s) of illustration are you currently working in, and what would you like to do more of?

I try not to limit myself, so I work my strengths and practice building up my other skills. While my focus now is painting and gallery work, I’ve done commercial jobs, character design, lettering, storyboards, and editorials. I would love to explore working in feature animation, doing character design.

I’m kind of a minimalist. When I have an idea in mind, it’s usually pretty well developed. I might do a thumbnail for composition or a quick sketch before diving right into the final piece.
I can work digitally, but I HAVE to draw some part of it by hand. Something is not right in the universe when I have to create a piece using only a computer. 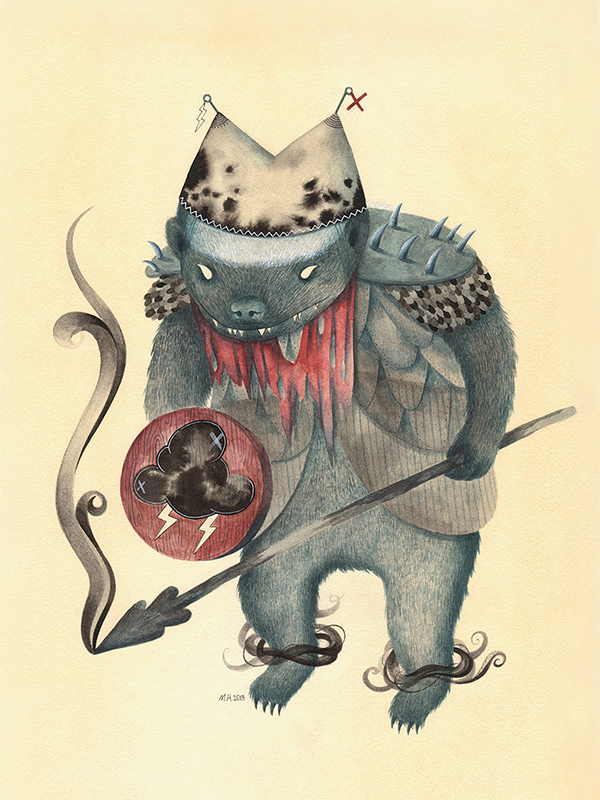 Always a story. I consider myself to be a storyteller, and I think I tend to inject emotion into everything I do.

I usually work in medium-ish sizes, but I don’t prefer it. I’d work much bigger if it wasn’t so impractical. Like wall-sized. Like, someone make me do a mural, please.

Animal Battle, all the way. I don’t think it’s any coincidence that I started doing my best work right after I quit my job.

On your website you say you were “raised in the dusty deserts of Arizona, and then moved to the lush forests of Portland, Oregon”… do you think the natural environment around you plays into your art at all, and if so how?

My current and past environments used to play a huge role in my art. I did a body of work a couple years ago that was entirely inspired by the desert and forest alike.
These days, nature and my Portland surroundings still inspire my work, but more as a backup character, not the main role.

My earliest memory of drawing was when I was 3 or 4 years old. I watched a man draw a clown’s face on a piece of paper. It didn’t matter that it was clown, what mattered was the magic of the act. 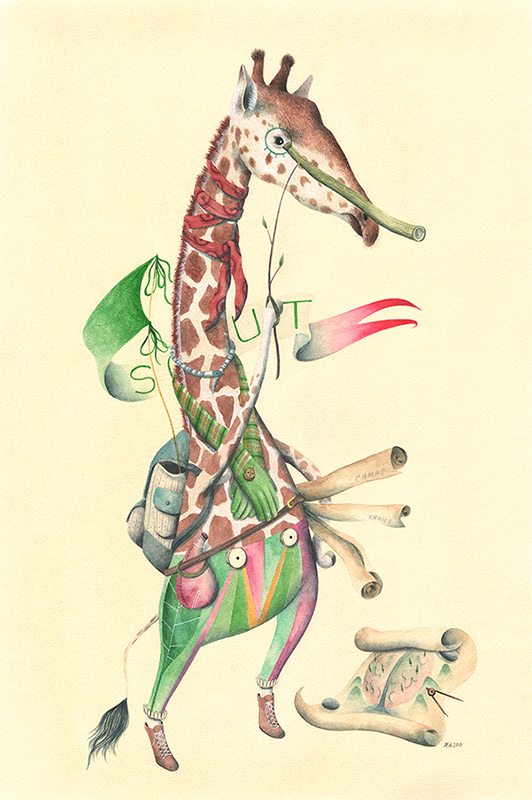 Yep. I’ve been faithful to them for the last few years and now rely on them as part of my process. They mainly stay at home though.

I’ve got a few group shows to produce work for, including a Wes Andersen-themed show at Spoke Art in November, and a solo show in February at Pony Club Gallery. More Animal Battle pieces, of course. And I’m always juggling a few commercial jobs.

My portfolio site leads the way to most anything you need to know about my art, including how to acquire some of your own: maryannahoggatt.com.

A bunch of comics and a running magazine. I’ve decided to run a half marathon next year. I think I’m crazy for making that decision.

Coffee in the morning, booze at night.

I haven’t travelled to enough cities yet, but my favorite American city is Portland.
London is my favorite international city I’ve been to, but someday I’d love to go to Tokyo.

Portland. I love it here. 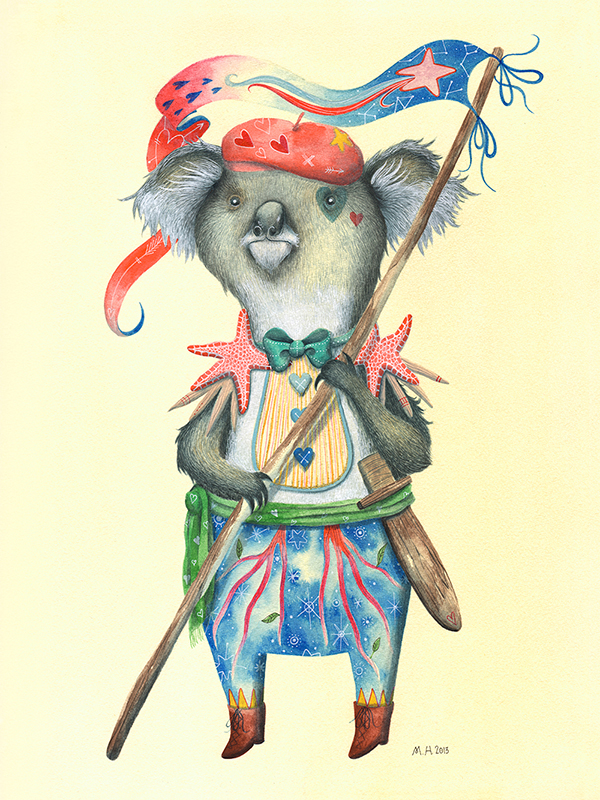