By: katrionachapman
Tag: beast, comics, graphite, illustration, machine, monsters, pencil, Pete Murgatroyd, The Tiny Pencil, tiny pencil
Comment: Comments are off
Award winning illustrator Pete Murgatroyd divides his time between Falmouth and London. His illustration, prints and comics are equally inspired by Heavy metal, epic science fiction comics/animation of yesteryear and a liberal dose if psychedelia, each densely packed image is a workout for the eyes. 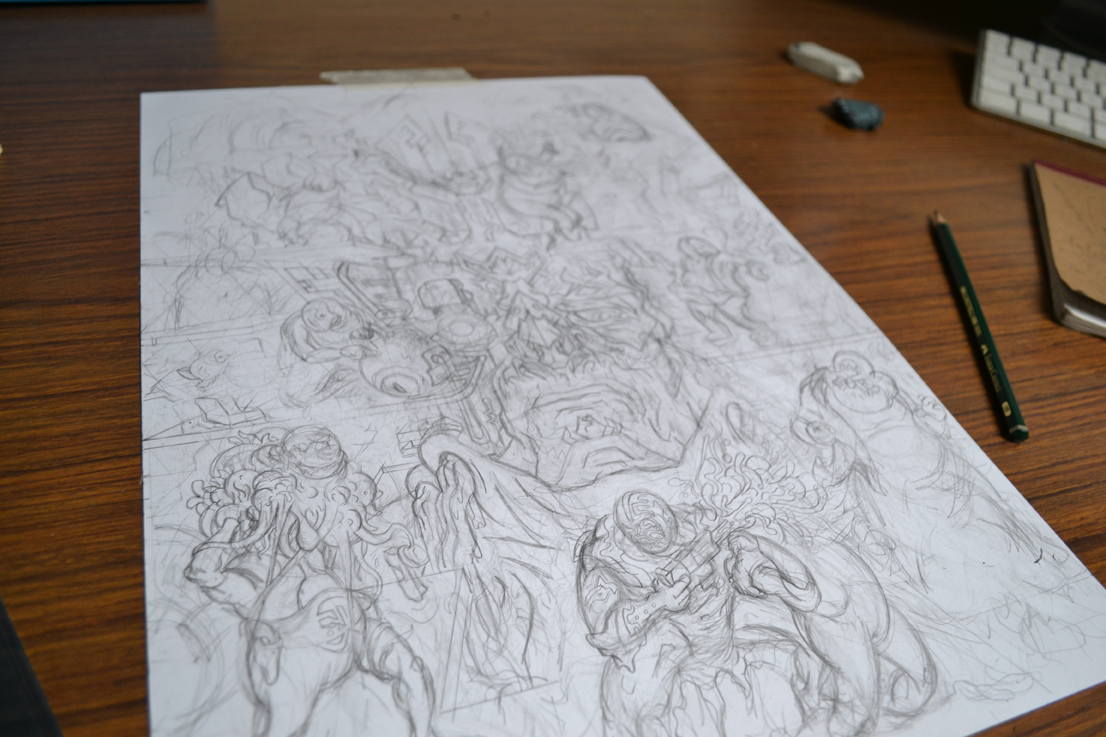 I’m an illustrator and comic artist based in Cornwall, I like B-Movies, Video Art and draw a lot of my initial ideas from these or Sci-Fi books, Old Comics and Fantasy Artists. For example I had an idea for a new drawing after reading Stanislaw Lem’s “The Futurological Congress”. I also write DIY music and have just released an EP on Soft Bodies Records. I can’t surf but can play the keyboard.

Your finished work is usually digital but you show a lot of really beautiful pencil roughs on your blog (www.petemurgatroyd.tumblr.com) …What do you like about working in pencil?

Drawing in pencil is where the enjoyment comes, its definitely the most direct form of my process plus you can rub out and I rub out a lot. I was thinking about this the other day actually. I did a BA in Graphic design before I realised I hated designers, and only learnt to draw after around 2006, some how I think my practice is still caught between the two worlds. 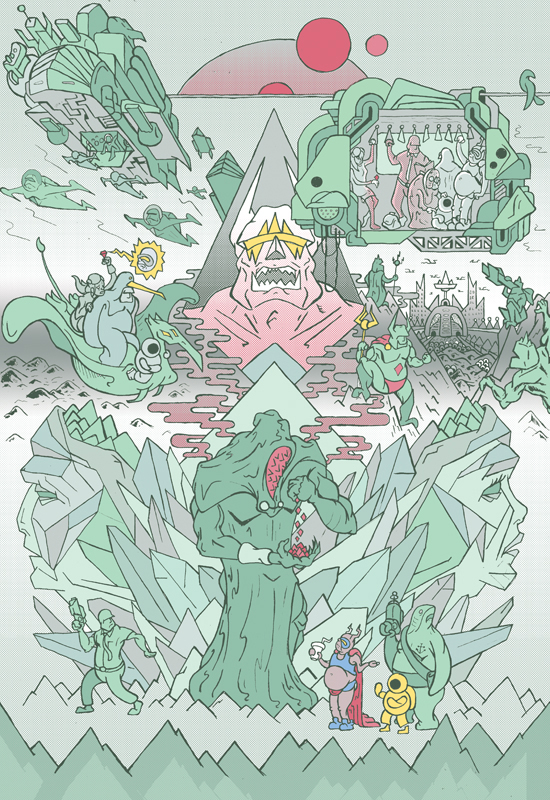 Do you always create such beautifully detailed roughs when you work? It seems like you plan your illustrations very carefully… does that just make it quicker/easier when you’re inking and colouring?

I’m not sure, I like to have a very rough pen sketch to start from with a few details decided, then I work out the perspective, vanishing points etc. and then start pencilling extremely loosely at first to get the spacing right and slowly it tightens up until finally I’m ready to ink over it all. Because of this the paper really gets a beating. In fact I split the Bristol board on this Tiny Pencil piece (one of the robotic birds) and when that happens I really panic. So I guess I go for half way between planning and improvising.

B Castell 9000 Faber-Castell for quality but when I run out I use a lot Daler Rowney Graphic F pencils simply because the local shop sells them, but I am positive the F’s are not always F’s some are harder others softer, this is both confusing and infuriating. And sometime they are even shattered.

I really like sharpies at the moment we use these at live illustration nights. I also really like making lo-fi collages for gifs or cover art for my songs on Soundcloud. I hope I can incorporate this side of things at some point. Ben Jones and the Paper Rad collective are probably the best example of this sort of thing. But I’m beginning to see more of it about.

Tell us a bit about how you approach colour in your work… a lot of your pieces are quite psychedelic and remind me a little of music posters from the 60s. What are some of your influences?

I try and have a colour scheme it my head but this goes out the window pretty quickly then I work through a few variations until something sticks. I really like Kilean Engs use of colour but it’s incredibly hard to do well.
I am drawn to bold colour palettes though, the Fletcher Hanks anthologies show how crazy you can get with just four colours and I have always liked Hapshash and the Coloured Coat’s poster work from the 60’s too.

I never try and fully pin down what I want to draw; I don’t believe it really exists until you start putting pencil down on paper and your forced to start making decisions.
I write initial ideas sometimes, but mostly sketch them in my muji pad. Then I flesh out the character work and details a little more and begin on the pencil work on Bristol Board and keep working at it until I cant do anymore. Then it’s generally on to tracing paper and from there to Photoshop.

With a comic piece I make sure I know how it will end, but I don’t get hung up on specifics, there is normally one frame which I know is the main one (the birds in this case) and then a few others that are concrete but I like to allow for intuition and sparks of inspiration, there is normally at least one. With a detailed illustration It’s very similar I’ll know the general concept but still allow room for improvisation.

Now I use A2 because I got tired of cramming and squeezing work into the standard A3 format. But for a fast turn around I’ll still use A3. 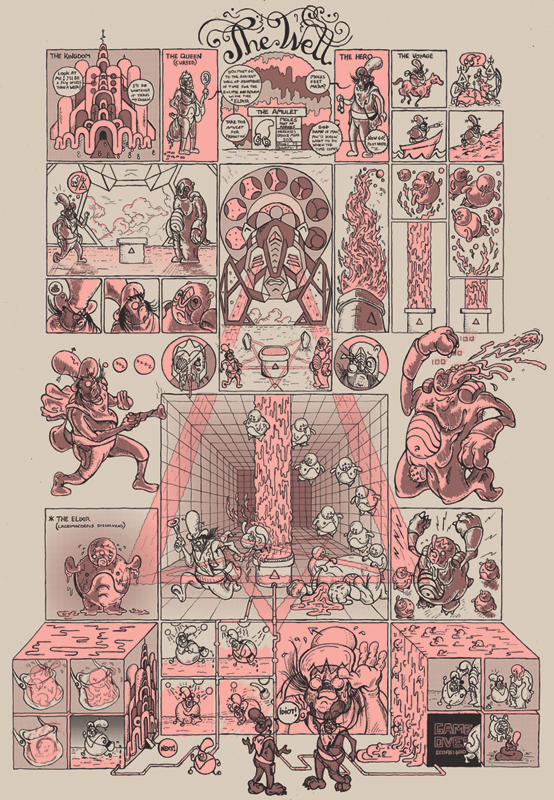 When it comes to comics I love paradox, opposition and contradiction. I really like things that shouldn’t work but do. Like the Cretan paradox or Epimenides’ Paradox. I drew a comic last year based on the philosopher Thomas Nagel’s essay “Moral Luck” this also involves a form of paradox. I don’t think it’s celebrated enough.

Tell us a bit about Dark Matter Collective. What do you particularly enjoy about collaborating?

I love the speed of it, working with Dog Boy and other illustrators really loosens my rigid style and you can really go for it, small mistakes get forgotten about because the overall impression is so epic. Also there are far more surprises inherent in the process because each illustrator see’s things differently, so one arm can become a nose or some ones hat turns into a second head etc.

You’ve done a lot of live drawing at various events… does that make you nervous or do you enjoy it?!

I still get nervous, but probably more so about the Music playing. I just remind myself that quality is not the priority its more the constant flow of ideas, collaborations and seeing where it all goes.

I really enjoyed making the piece for this issue actually but my favourite would be a comic called “Cough Up” about two guys who have a coughing match in a empty cinema, I purposely made the characters simple and everything really easy and quick to draw, and everything just seemed to work with out too much effort and it all tied up perfectly in the end. That has never happened before or since.

My dad was good at drawing faces I remember that, but mostly I remember drawing a really good portrait of the footballer Peter Beardsley, and then a cover of an X- men comic, I took it to school to show a rival drawer, his wolverine pretty was good too. 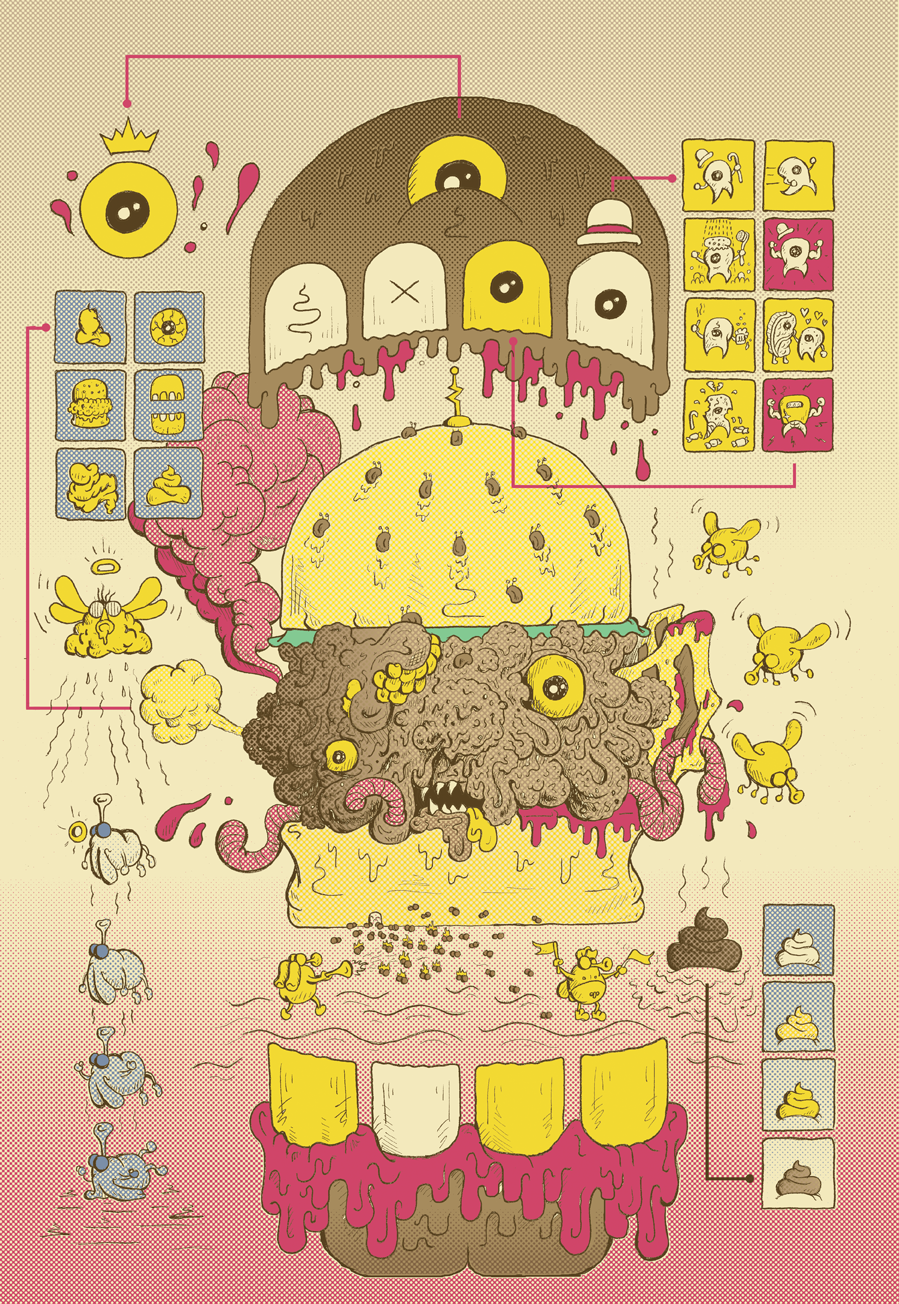 Loads of them I buy bulk packs of Muji pads whenever I’m near a store. They’ve become my favourite, I hate it when the paper is too nice because its stops you using them which defeats the point. I use them for anything from a quick sketch to shopping lists, letters to my gran, and writing down people, websites or places to research later. When I look back through them there still stuff I haven’t got round to checking. I was reading an interview with S.Clay Wilson in the comics Journal the other day and he takes his sketch book to bed too, I think a lot of artists do this.

Quite a few of our contributors at Tiny Pencil have come from same the MA course at Falmouth College as you… did you enjoy your experience there? What do you think makes this course such a hotbed of new talent?!

It’s hard to say really. The standard is definitely high at Falmouth. I really think it is largely down to the Authorial aspect of the course, and in finding out just what this is or can be.

I’m about to start the initial planning of a mini series of small-illustrated biographies based on great writers, myths, scientists and philosophers with Luno design.
I’m also working on the initial story arc for a long-term comic piece that revolves around a character that is woken from self-induced augmented reality. And right now a few more A2 art works that I’m hoping to screen print in time for Christmas, plus I’m working on another set of electronic songs for another EP or Tape release in the New Year.

Through my website shop, by emailing me directly or zine fairs. (www.petemurgatroyd.co.uk)
I’ll be revamping my online shop soon.

You can buy or listen to my brand new EP via Soft Bodies Records. 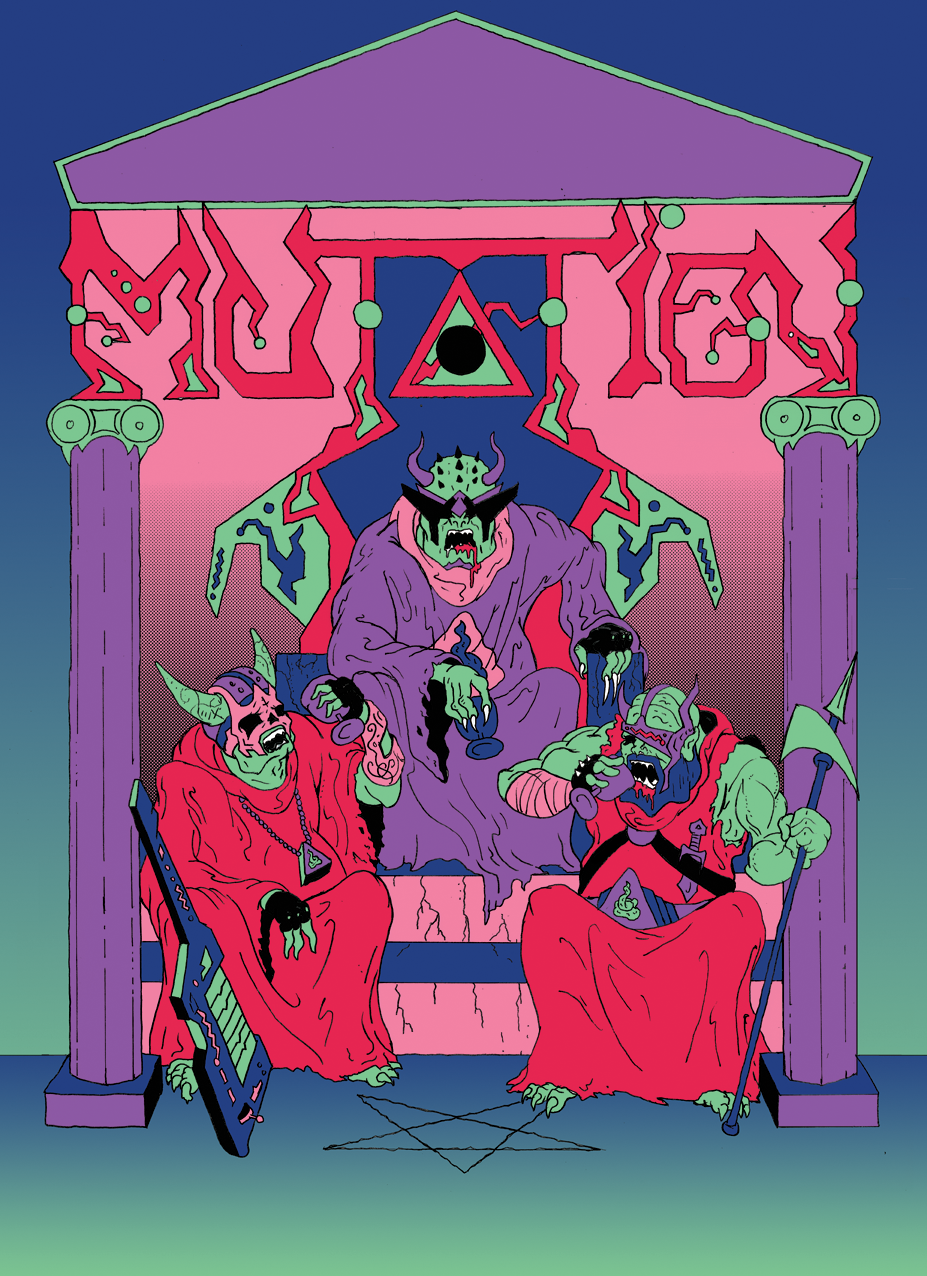 “The Ice Man” I think

Coffee, nicotine, or booze?
One coffee in the morning generally.
But occasionally all three.

Favourite city in the world?
Bern or Berlin

Favourite city to draw/sketch/illustrate/create in?
Falmouth 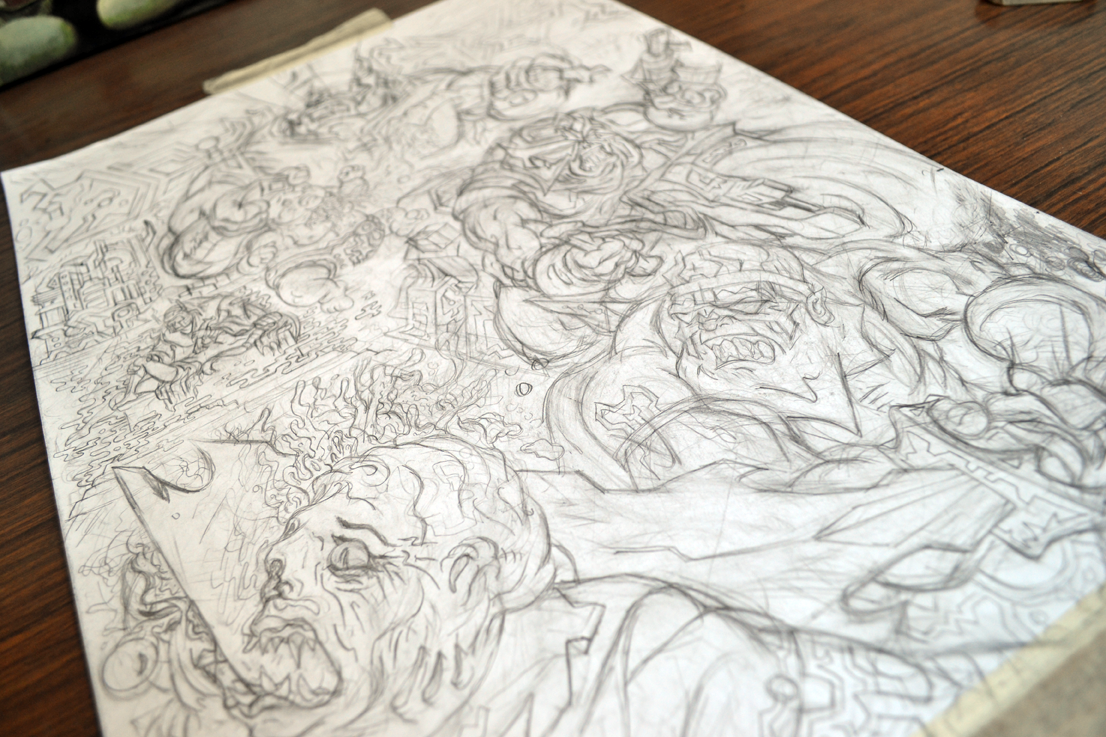