Inspired by Marvel and DC Comics, Sina Sparrow started drawing his own comics when he was just 11 years old.  At 16, he discovered queer comics and zines. With a unique style and voice all his own, Sina is the creator of cult comics such as his autobiographical work ‘BoyCrazyBoy’. 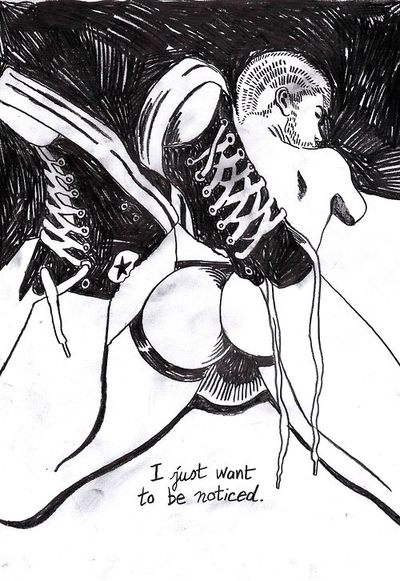 It just feels very spontaneous, I like the different weights and textures you can get using pencil.

I use writing pens like Uni-ball, I also like to use a bit of gouache paint now and then, but I draw in pencil most of the time now.

You do a lot of fantastic and quite personal diary comics, and also some fiction plus illustration commissions. What type of work do you enjoy the most, and why?

Thank you, I really enjoy it all. The diary comics are the most personal as you say but I try to make even the illustration commissions I do feel personal to me; I like to have a personal connection with all the work I do. 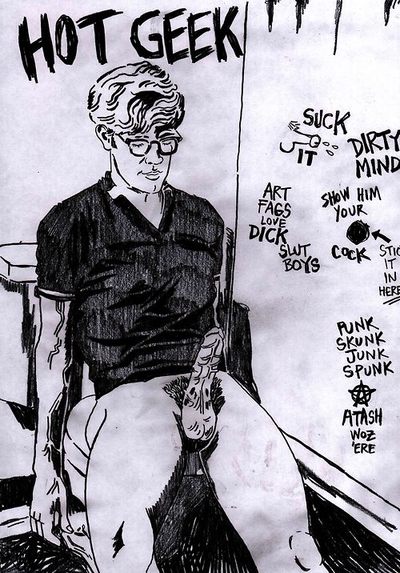 The comic is called Atash and the Man-Gods of the Homoverse and I’ve been throwing around ideas and working on it for a long time. It’s basically based on the fairytale of Snow White and it’s about Atash, the God or Angel of Gay Love. Atash has kind of an evil stepfather who wants to see him dead, and he ends up escaping to the human world, and high jinks ensue. The first episode is done now and it’s being published in the second issue of SATANIC MOJO COMIX.

I think when I have an idea I usually sketch a few different versions of it and go from there, I try to work quite instinctively and spontaneously and try not to overly-labour the idea too much or it kills the fun.

I think stories are a part of most of the work I do, but obviously this is more the case when I do a comic strip.

You took part in ’30 days of creativity’ in June, could you tell us about it? How did you find the experience?

It was tough but brilliant! I generally tend to draw quite a few pieces a week anyway but drawing one image per day was a bit of a challenge!

Usually A4, sometimes A3. It’s really about convenience, I have quite a small workspace.

Portraits and the human figure are clearly your speciality in terms of subject-matter… I particularly like your sketches of people in public places with interesting notes on what you or they might be thinking! What appeals to you about drawing people?

I’ve always preferred drawing people to anything else: they’re just more alive to me than things, like cars or buildings. I’m interested in human emotions and relationships and behaviour, so it just makes sense that I would love drawing people most of all. 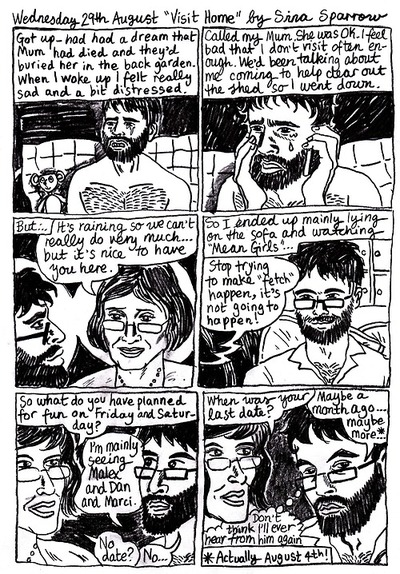 Your diary comics can be very personal… which I love! I admire artists who are very open and honest about themselves in their work. Do you find it easy putting personal stuff on the page? Is there every anything that you’ve decided not to draw because it’s just too private?

I do hold back certain things but at the same time yes, I’m very honest in my autobiographical strips: what’s the point of doing autobiography otherwise I think? I go into a weird head space when I decide to do a really personal comic about sex or whatever, I really don’t think about the potential embarrassment until I’ve done it and it’s printed – and then it’s too late, ha ha!

Oh that’s really difficult! I really love my diary comics and my drawings from observation as well, but I also really love the more fantastical stories I’ve done. One really fun thing I did recently was a triple portrait of a guy’s boyfriend, that he commissioned for a Valentine’s Day gift… It was really sweet and interesting because at the time, they were in a long-distance relationship: so he wanted me to draw his boyfriend’s picture from a series of screen grabs taken from their video-chats. It’s really interesting how different forms of new technology influence the way we imagine and picture relationships now.

My Dad used to draw for me, with me, I remember this really colourful train he drew for me… I used to read lots of children’s books with illustrations, things like The Wizard of Oz and Alice in Wonderland, and the Moomins books: those are the first things I really remember seeing, as well as simpler picture books.

Oh yes, though not as consistently as I’d like. Most of my drawings of people in public are culled from my sketchbooks. 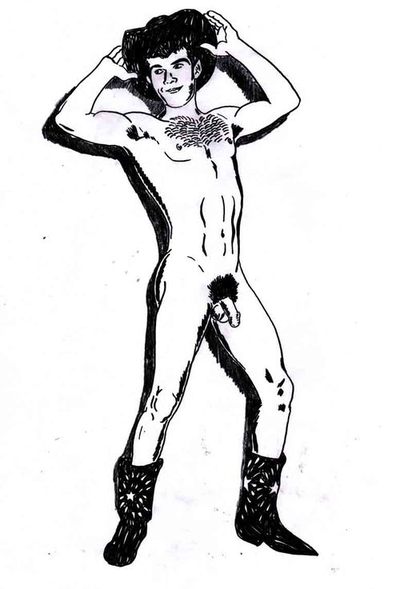 You recently gave a reading/talk in New York, do you find talking in front of an audience easy? How did it come about? Is it something you’d like to do more of in the future?

My friend Carlo Quispe who’s a cartoonist in New York knew that I was coming to town and hooked me up with this amazing queer pop-up bookshop, the Bureau of General Services – Queer Division, and we both did a reading and a projection from our latest comics there. I read the story If you want me to I will be the one that is always good, which is an autobiographical story that was recently published in QU33R, an anthology of LGBT comics edited by Rob Kirby and published by Northwest Press. It’s a very intimate story about sex and self-esteem and finding sexual negotiations difficult. It was quite weird reading it, in front of a big audience but at the same time not that difficult: I just got into a certain kind of head-space and went for it. I would love to do more comic book readings/projections, I think we should organize some for the cartoonists of London.

I’m currently excited about the first chapter of Atash being published in SATANIC MOJO COMIX in May, and as I said I just had an autobiographical story about sex published in Rob Kirby’s QU33R anthology. I am working on a couple of exhibitions with my friend Kev Clarke, and also working on putting out another zine of erotic drawings – DIRTY MIND no. 2 – with my friend Paul LeChien. I’m planning to put out another zine of drawings – the second issue of my zine PRETTY BOYS IGNORE YOU – in Summer as well. And then hopefully the third issue of my diary comic ART FAG.

My website has most of my work on it, and you can buy most of my zines as well as badges and prints from www.boycrazyboy.bigcartel.com – I’m thinking of making T-shirts soon as well! 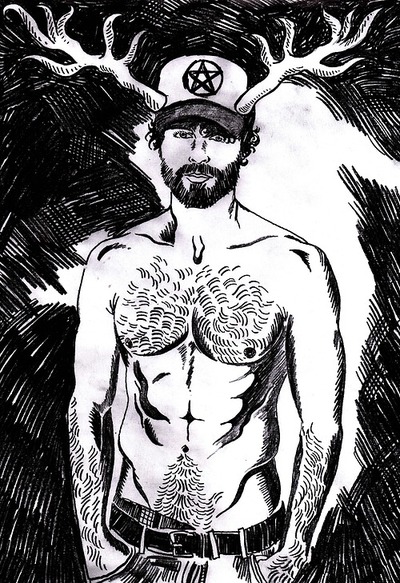 I’m right-handed but when I wear a watch, I like to wear it on my right hand – which is apparently weird.

Only Lovers Left Alive that was fun, and Her by Spike Jonze, which I found really moving.

Some books about Wicca and The Return of Superman trade paperback! Ha!

San Francisco, LA and New York are all favourites

It’d have to be London, I’m bad at concentrating when I’m on holiday!

Sina’s work appears in Issue 3 of Tiny Pencil: The Beast Issue… Monsters, Machines and Unnatural Things! Available to buy here. This interview was brought to you by The Tiny Pencil – fine purveyors of the pencil arts.
Follow us on twitter @TheTinyPencil, Facebook, Tumblr, and Instagram for the latest news on all of our new anthology artzines.