Hi Yoko. Thanks for taking the time to talk about pencils. Could you tell us a bit about yourself and your work?

Hi! I’m a Japanese painter currently living in London. I left Japan for art school in Los Angeles in 2000. After living and working there for a while, I moved to Thailand in 2007. Then in 2010, I came here to England, where I am now painting and also working on children’s book illustrations. 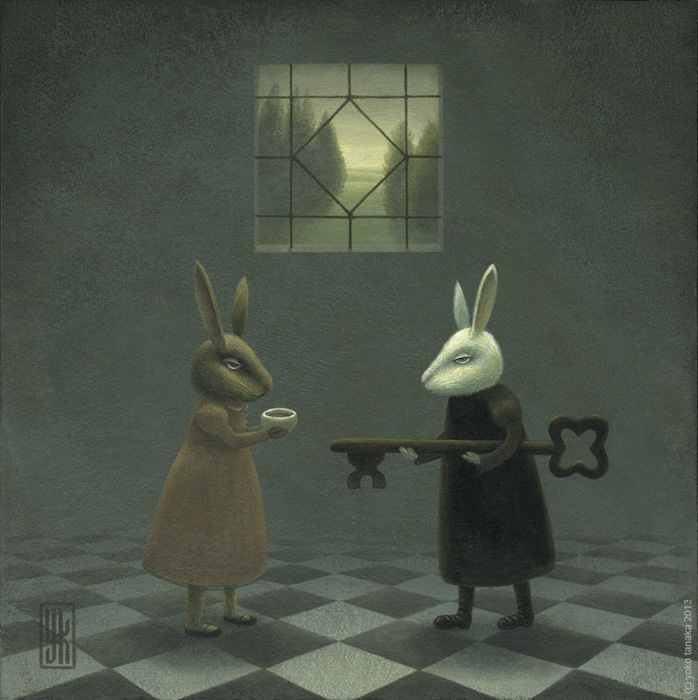 We feel really lucky to have you contributing to the zine because you don’t normally work much in graphite. Was there something in particular that appealed to you about doing something in pencil?

I feel lucky to be invited, so thank you. It was a really fun challenge for me. Graphite can actually be a bit daunting as it can immediately reveal the artist behind the work as it’s such a simple medium. Before starting, I was a bit nervous and had to spend some time figuring out how I could transfer the lines, and tones and shapes from my imaginary world onto paper. I knew graduated tones would be key to my images and I believed graphite could create amazing effects if I did it correctly.

Well, we were blown away by your final artwork. They have such a haunting quality to them, and you’ve really achieved a truly painterly effect in graphite that is quite stunning. Could you tell us a bit about some of the techniques you used?

Thank you! I’m glad it worked out. I wasn’t actually trying to avoid drawing lines, but the pieces ended up being more effective using shapes and graduated tones rather than lines. To make some of these soft gradations, I used a chamois leather cloth. First, I printed out my sketch on paper, then cut out the shapes (like the photo below), and then I used the chamois to softly rub in areas of graduated tones. After that, I drew in details with a finely sharpened pencil. I used Staedtler 4B, 2B, HB, and 4H pencils). 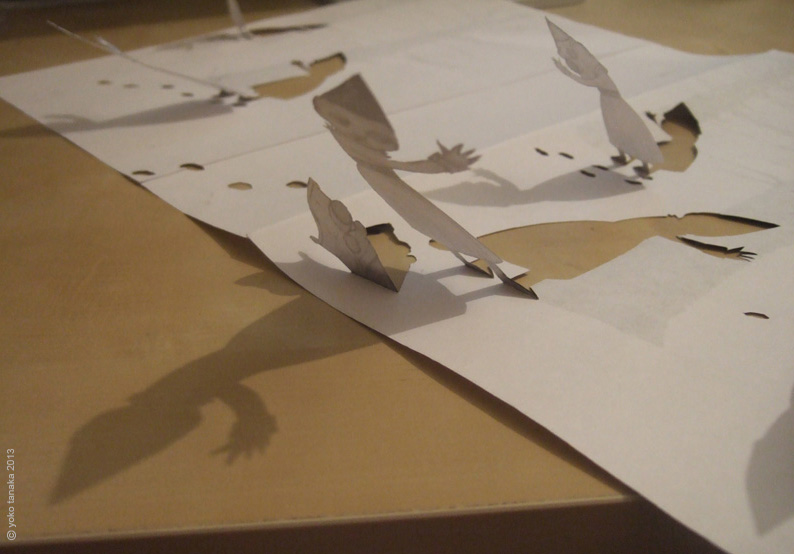 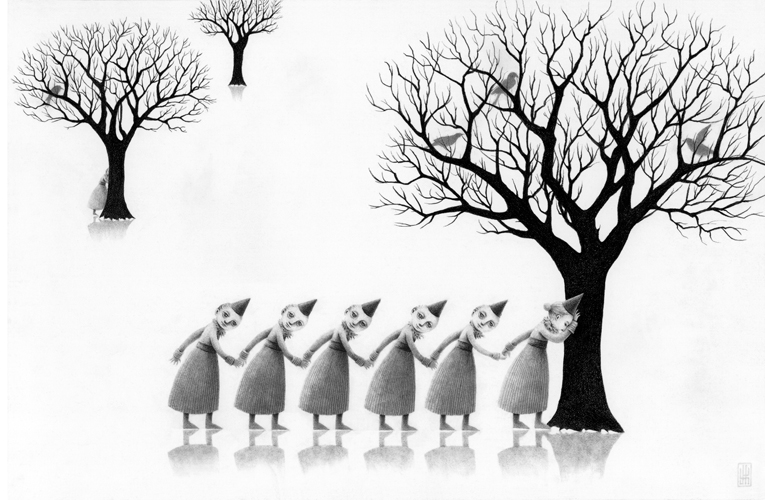 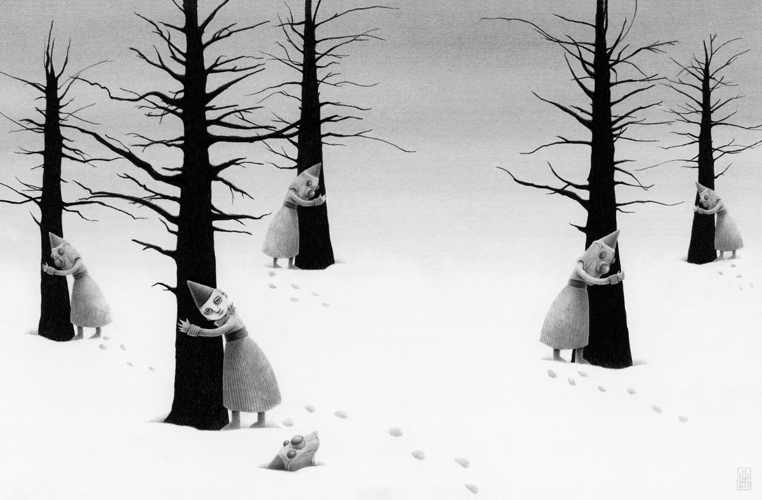 Your work is so atmospheric and imaginative. Where do you draw your inspiration from? Could you tell us about the story behind your pieces?

The title of the first image is “Before Fukushima”. The girls are playing “Darumasan ga Koronda”, an old Japanese children’s field game. I think many other countries have similar games, and this image really reflects my childhood time spent in nature. The girls are like tiny beings living in my mind; but in a way, they are also my other selves.

The title of the second images is “After Fukushima”. It is an image of nature after its destruction – after the trees have all died. The girls have come back to their forest, wearing protective masks against the radiation. But sadly, all that they find left are dead trees. It’s been two years since Fukushima’s nuclear reactors collapsed in the earthquake and tsunami, but the gravity of the situation is still there. I feel so sorry for everyone who has been affected, but most of all, I feel sorry for nature which must keep suffering the unnecessary damage of human beings.

This is something that has been happening particularly so in the last few centuries – and all over the world. So even though this particular disaster happened in Japan, the images are not distinctly Japanese, but attempt to speak in a kind of universal language.

Every time I hear of devastating events like Fukushima, my mind wants to escape to hidden imaginary worlds like this one, where I might be comforted by peaceful creatures or feel the affection of nature and animals. But as you can see this time, even this place was invaded.

Yes, it is truly a haunting, sobering piece that spoke to us on a very universal level — in an almost dream-like way. Perhaps you could you tell us a bit about your creative process, from the initial idea to the finished piece?

When I have ideas for what I want to paint or draw, I usually see the finished images clearly in my mind in three-dimensions with full color. Even with sounds and smells sometimes. They are so realistic and alive. The only thing I have to do is hurry to transfer the images onto canvas or paper before I lose that emotional connection. So I usually draw a very quick sketch and then jump straight on to painting. 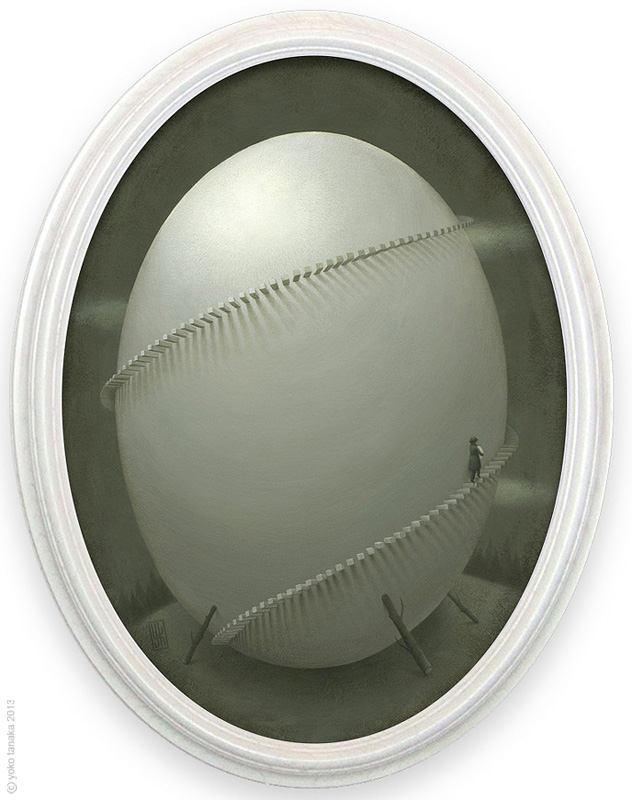 And what size do you tend to work at? Do you have a preferred scale?

The bigger the scale, the more exciting it is to me. Some of my works are over 200cm wide. When I’m working in this larger format, I feel I can really step into my imaginary world. However, with my current space in central London I’m not able to work at that scale. So I hope to find a way towards a bigger working space in the future again.

We hope you do! We’d love to step into your imaginary world too.
Finally, what are you working on now? What can we look forward to next from you?

I’ve been very busy working on some book illustrations, but I’d really love to be more active as a gallery painter here in London as well. Before I moved overseas, I was showing my paintings quite a lot at galleries in Chicago and Los Angeles. But I had to step back from that because I was moving around to so many different countries in the last few years. But now that I’m finally starting to settle down in one place again, I’d really like to find a good gallery here and start showing again in the U.S. 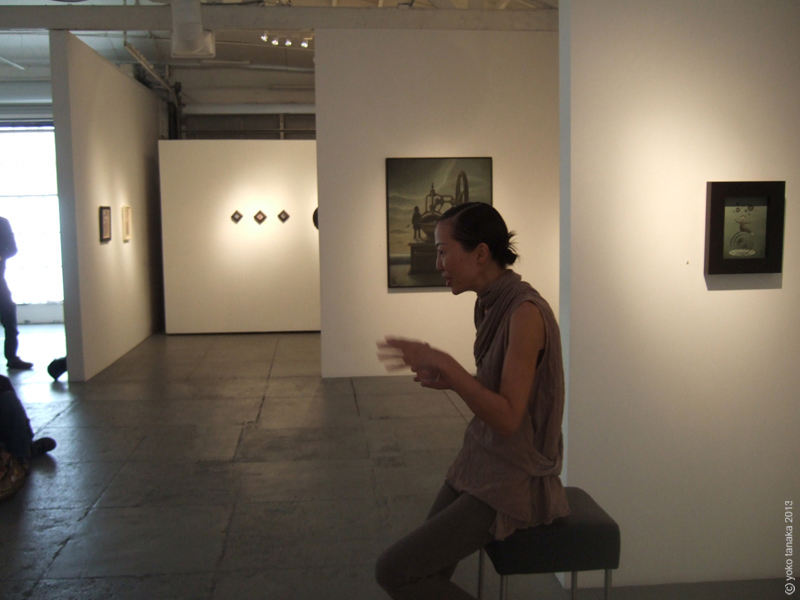 This interview was brought to you by The Tiny Pencil – fine purveyors of the pencil arts. Follow us on twitter @TheTinyPencil, facebook and tumblr for more artist interviews and news on all of our delicious new anthology artzines.