I write and draw kids comics and have been since 2002. 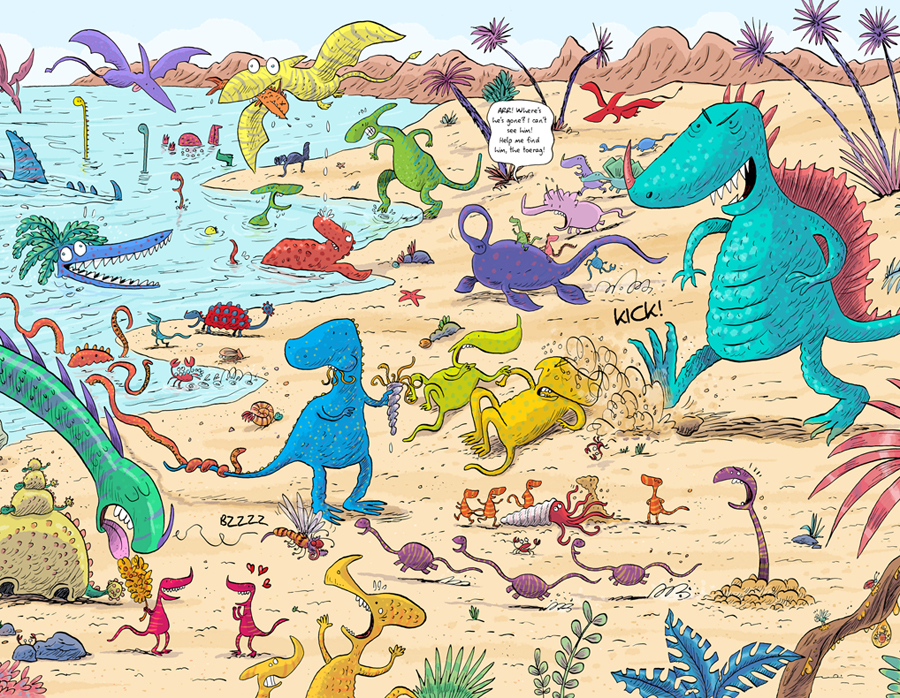 Immediacy, ease of use and it’s a medium I’ve used since I was a kid, so it’s very familiar. It’s mark making is very unique and I find it very inspiring when used by others. I remembering going to an Egon Schiele exhibition many years ago and being entranced by his directness in his pencil mark making.

I generally jot down notes in my sketchbook, either plot points, gags or conversations. I accompany these with tiny sketches of character expressions and various character sketches/designs. I then plan the pages out in my sketchbook, working out pacing and narrative. Then I get an A3 sheet of paper and rough out the pages again based on my sketchbook version. This version is normally too scruffy to show, so I always work on a second tidier rough. In this case for final artwork, but usually for editors to look at and for me to confidently ink with on my lightbox.

A3. Lots of space and freedom to work. Any smaller is fiddly and messy, any bigger is time-consuming and a faff for scanning!

Do you have a favourite subject matter?  What’s the particular attraction to it?

Animals and their jolly lives. Friendships and relationships between people and how we all get on in the world fascinates me, and those are the stories I want to tell. I also love drawing animals and often wonder what they think about the world they live in. It’s all about the cards you’re dealt with. 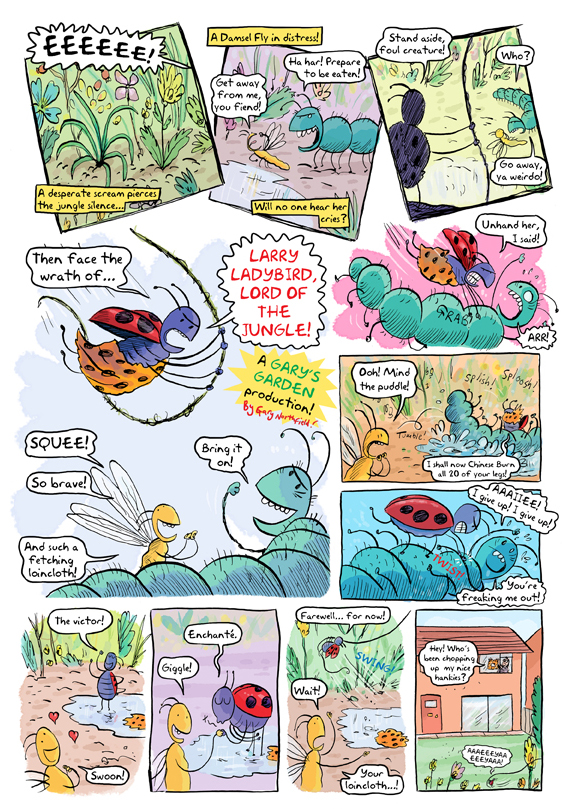 What materials do you seem to always return to?

Dip pen, ink and bristol board. How i love ’em.

Can you tell us about a favourite or formative creative experience?

When I was about seven I used to make loads of tiny cardboard cut-out cartoon characters. I think I nicked the idea from the back of a cereal packet which was promoting Disney’s Robin Hood or something with cut out characters. I made so many characters, Superhero dogs, scallywag alley cats, bank robbers, pirates etc., and made them aeroplanes, houses, boats and alleyways to run around in. I used to spend hours playing with those dudes and carried them everywhere in a big carrier bag. Unfortunately, we moved house and my mum, who was usually very supportive of my creativity, made me throw them away as she said it was just a bag of rubbish. I don’t think she understood what it all was. I was devastated. In hindsight I could’ve easily had kept them and she wouldn’t have noticed. But hey ho. 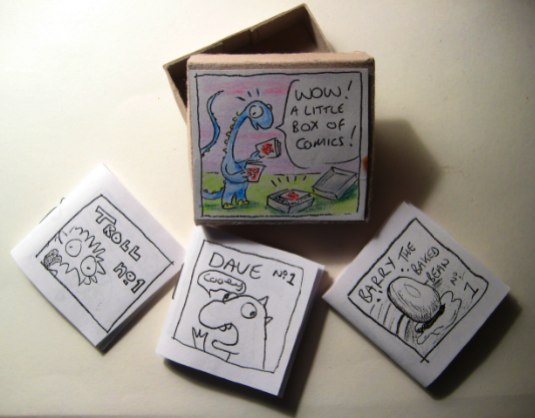 Probably snippets from comic pages. There’s a strip by Jay Stephens called Land of Nod and there’s a story about a dolphin called Kerplunk. Kerplunk was showing off how he was faster than his fellow dolphins and we see a face of a sad looking dolphin who was too slow. He’s called “A fellow” and it always cracks me up. I could read that strip a million times.

I remember in playschool (pre-school) I always painted big massive messy swirls and called them monsters. I kept that up for a couple of years I think.

Could you tell us where the inspiration for teenytinysaurs came from?  Is it wrong to want a teenytinysaur for a pet?

Teenytinysaurs originally stemmed from me watching lizards dressed up as dinosaurs in hokey old dinosaur films from the 1960s and me feeling sorry for them. They quickly developed into a conduit for my memories of being a young kid and wondering what the world was all about. Keep them as a pet, by all means. But they do nip! 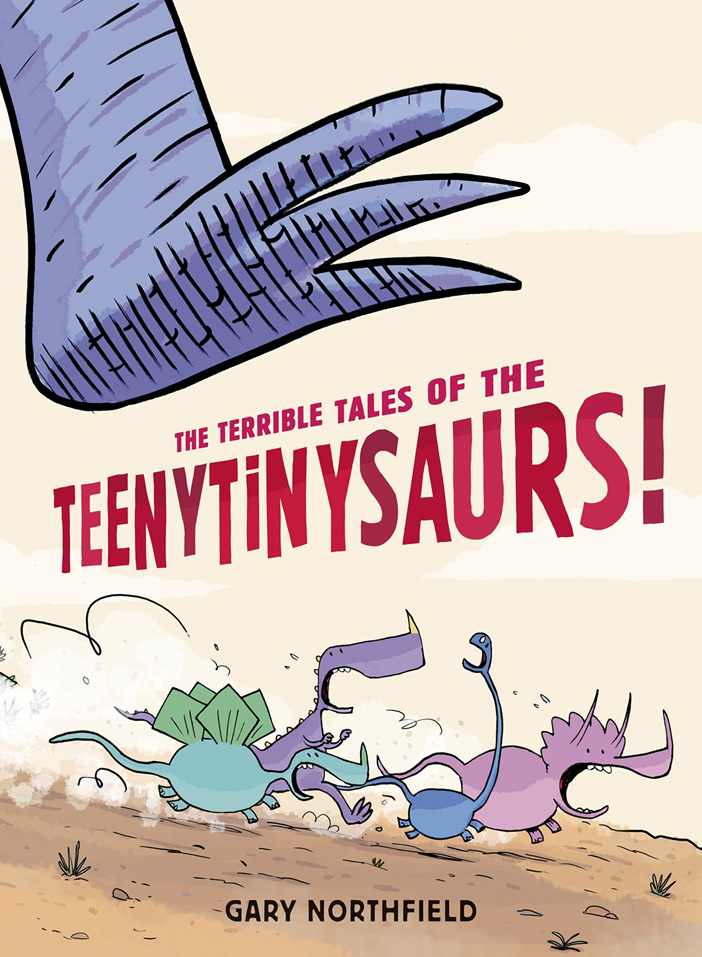 Your award winning series, Mini Histories, features anecdotes from the lives of influential thinkers – such as Einstein and Martin Luther King, Jr.  Who are some other figures you would like to create comics for?  What anecdotes might they contain?

I wouldn’t mind doing longer form stories about important figures in history. Napoleon and William the Conqueror interest me a lot. The idea that you are a megalomaniac and want to rule over other countries is a weird state of mind that really fascinates me. All that power and other people’s lives in your hand, including people who gladly follow you and obey you. All very odd. The small, ordinary talk whilst wielding that power would be interesting to play with.

Your work is very color saturated.  Has this always been the case, or did you ever go through a black and white period?

My earliest comics were black and white, mainly out of necessity. I was always interested in black and white though and was a big fan of woodcuts back in my student days.

How often do you work in pencil?

I always use pencil, but not as a final piece of art anymore. I did for my early minicomics. I love the medium and could stare at pencil art for hours.

Yes, for story notes. I rarely, if ever sketch these days.

Do you have a green thumb?  A hefty portion of your work seems influenced by your personal garden or at least, by nature.  Do many of your ideas come to you via observation of the natural world?

Definitely. I often watch birds and wonder what they’re up to. Or, once I saw two big cobwebs sat together in a bush, so that got me thinking about how two spiders as neighbours would get on. Lots of the stories come indirectly from real life though (relationship break-ups, things people say etc) 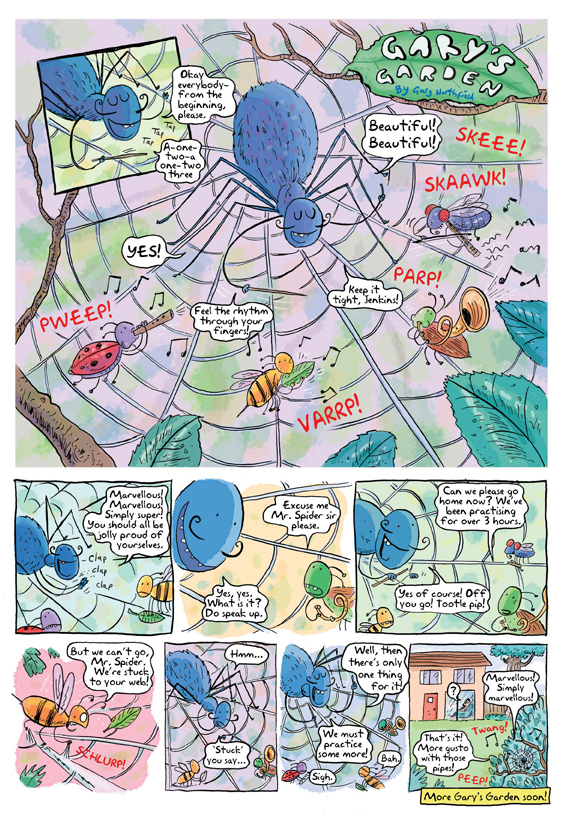 I’m about to embark on a new project that is non-comics, which excites me. It’s a series of kids chapter books and mixes words and pictures, a bit like Captain Underpants and Horrible Histories. I always like a challenge and I can’t wait to dive in. I also want to write and draw an historical drama graphic novel I’ve had buzzing around in my head for a couple of years. It’s not for kids and is a completely different kettle of fish for me. It will either be awesome, or an absolute disaster. Not knowing how to tackle it yet has stopped me getting started. One day though!

As mentioned earlier, I write and draw regular strips for The Phoenix and National Geographic Kids. I also have three new books on the horizon I can’t really talk about yet, including the chapter book I mentioned earlier. Those will keep me busy for the next year or two!

I’m in The Phoenix weekly children’s comic most weeks with Gary’s Garden and in National Geographic Kids every month with my mini-histories. I’ve just had a kids graphic novel out from Walker Books called Teenytinysaurs which you can buy from most book shops and online. I also had a book collecting some of my Beano strip Derek The Sheep, out from Bloomsbury. It’s out of print, but you can still pick it up from usual internet stores, or from me! 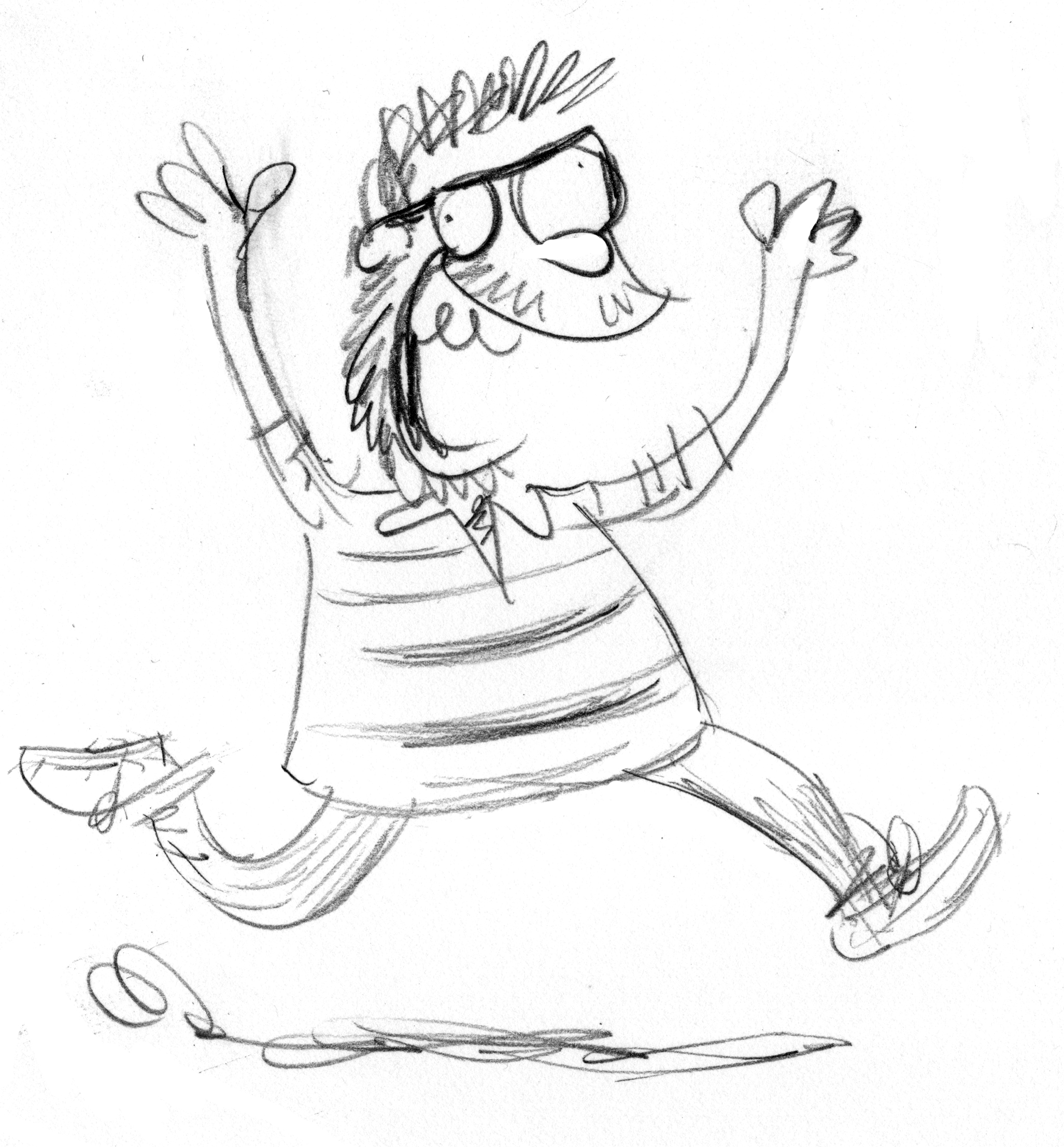 Star Trek – Into Darkness. (I liked it!)

I’m a big fan of Boards of Canada and am excited to be playing their first new album in 8 years. mind blowing. Also Kenny Dennis.

EC Archives from Fantagraphics, in particular Corpse on the Imjin by Harvey Kurtzman.

This interview was brought to you by The Tiny Pencil – fine purveyors of the pencil arts, and mishmosh artist Heather McCalden.