Joshua is an illustrator working in Folkestone, Kent. A recent graduate from UCA-Maidstone, drawing has always been a great passion of Joshua’s for as long as he can remember. Nothing gives him more pleasure than sitting down and immersing himself in a piece of work. Creating imagery with a range of different media that frequently include pencil and Photoshop, his personal work has a resonant, emotional quality that often touches upon notions of gender and sexuality. 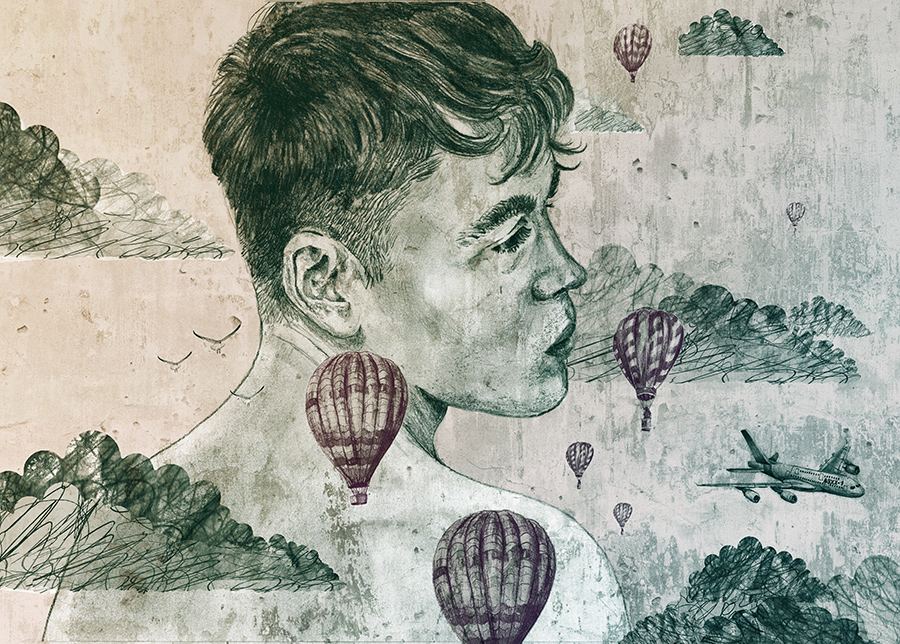 Hi Joshua! Thanks for taking the time to talk to us about your work. Could you tell us a bit about yourself ?

I live and work in Folkestone, Kent. At the moment I am spending my time making work that is slightly more ‘editorial’ so that I can finish my portfolio and start making work for magazines and newspapers.

I have drawn in pencil as far back as I can remember; it just always felt right. Personally I like the friction of lead on paper more so than the feel of a pen gliding over a page. I also like how you can modify marks after you are done to almost sculpt a drawing. 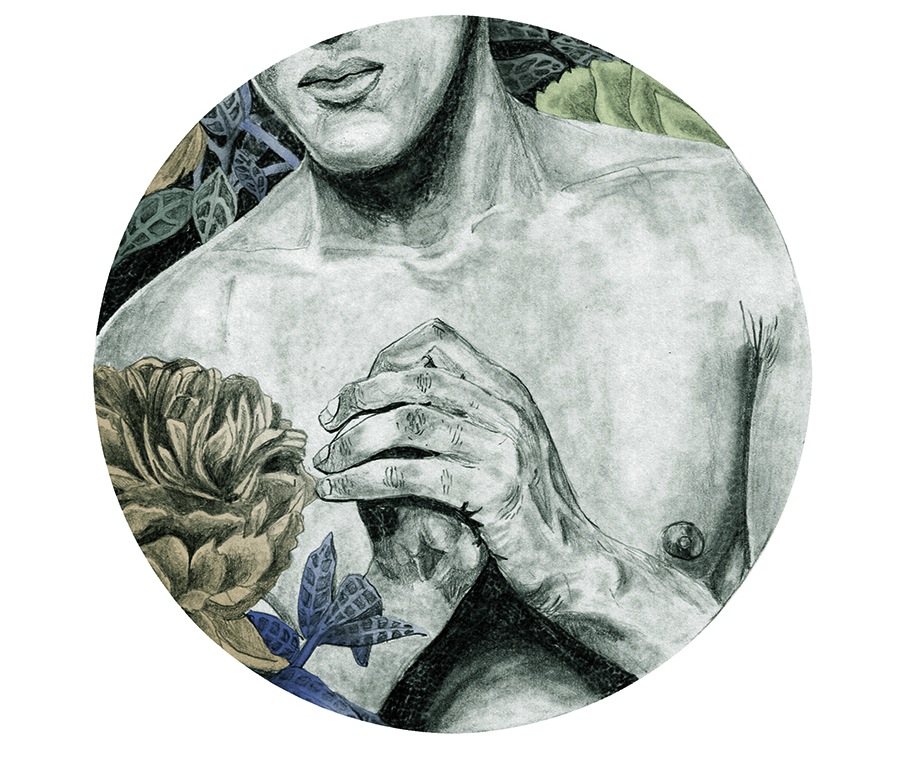 I think it has to be music strangely enough: artists like Kate Bush and Bjork have a habit of transforming each album into its own universe, taking every aspect into consideration such as font, the way the words are sung, the instruments, etc. This idea of limitation and using only several key elements to express a scope of emotions excites me even today, and I always listen to music that matches the mood of the image I am drawing.

Walk us through the musical inspirations in one of your pieces!

Ok so the comic I did for Tiny Pencil was based on a song by Kate Bush called ‘Mrs Bartolozzi’. The song has its own meanings but I interpret it as a widow who is morning the death of her husband, and the everyday plays a role in reminding her of his existence, and their relationship together. One line in the song reads, “Out of the corner of my eye, I think I see you standing outside / But it’s just your shirt hanging on the washing line, waving its arms as the wind blows by”.

I thought to myself – what would it feel like to be the woman in the song? And I imagined myself wrapping a shirt around my body in one frame, and the shirt being the spirit of my boyfriend in another. I hope it’s emotional and people connect regardless of the homosexual aspect.

What attracts you to the medium of the comic?

For me it has to be the easiest way to show a narrative. Whenever I make a page I imagine it as a scene in a film, then I gather references and try to make things as simple as possible. I try to make them like…I don’t know, an Ikea manual for a desk or something. You have each step…1, 2, 3 and when you have read the whole thing you have a full understanding of the message in the comic, hopefully! 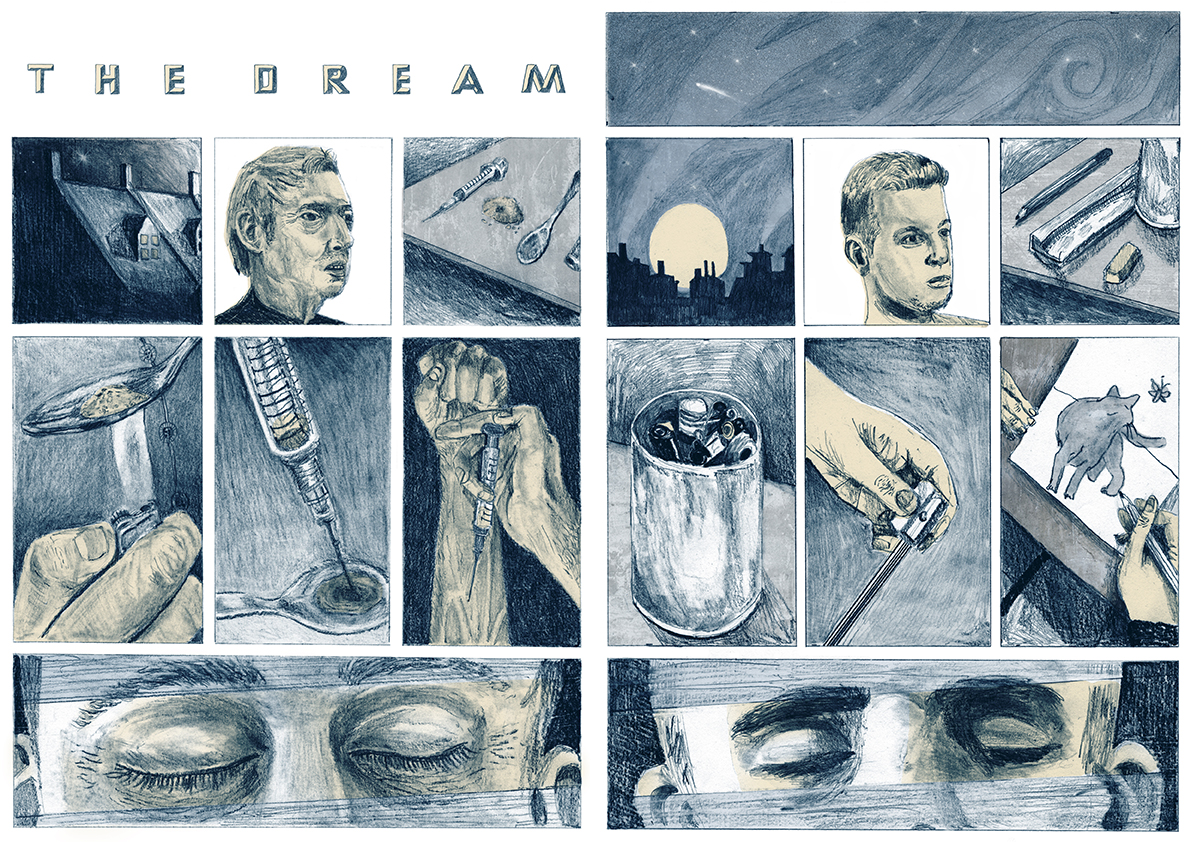 Could you tell us about your creative process?

Ok, so not every piece I do starts and ends in the same way. Usually I start by thumbnailing ideas, playing with composition, and after I get it right I hunt through the web to find imagery. This imagery is used to make a digital collage/sketch which super fast, and super fun! It allows you to drag/drop and manipulate the image quickly so you have a obscure unique reference to work from.

From the reference I draw onto paper, using all sorts of pencils and erasers. When I am done I always scan in my drawings, where I use Photoshop to clean them up and enhance them using my drawing tablet. Sometimes I colour, sometimes I don’t.

For me it’s usually always a case of problem solving. I think about something I would like to say, usually personal things that relate to me, or stories that I have been told. Movies, music and everyday life can trigger an emotion/idea, then I start to think: “What’s the best way of showing this as an image?” That’s when the thumbnailing begins.

Some of your more recent works have also explored an alternative possibility of conceptualizing gender or “multiple masculinities” through gorgeously emotional portraits of men in the traditionally feminine sphere of nature. Can we expect to see more of your work in the direction of social commentary?

Yes, for sure! I feel like I have only just scratched the surface with this. I hope to have more informative images, or perhaps use more narrative within the image to suggest such themes, instead of just portraits of boys and flowers. 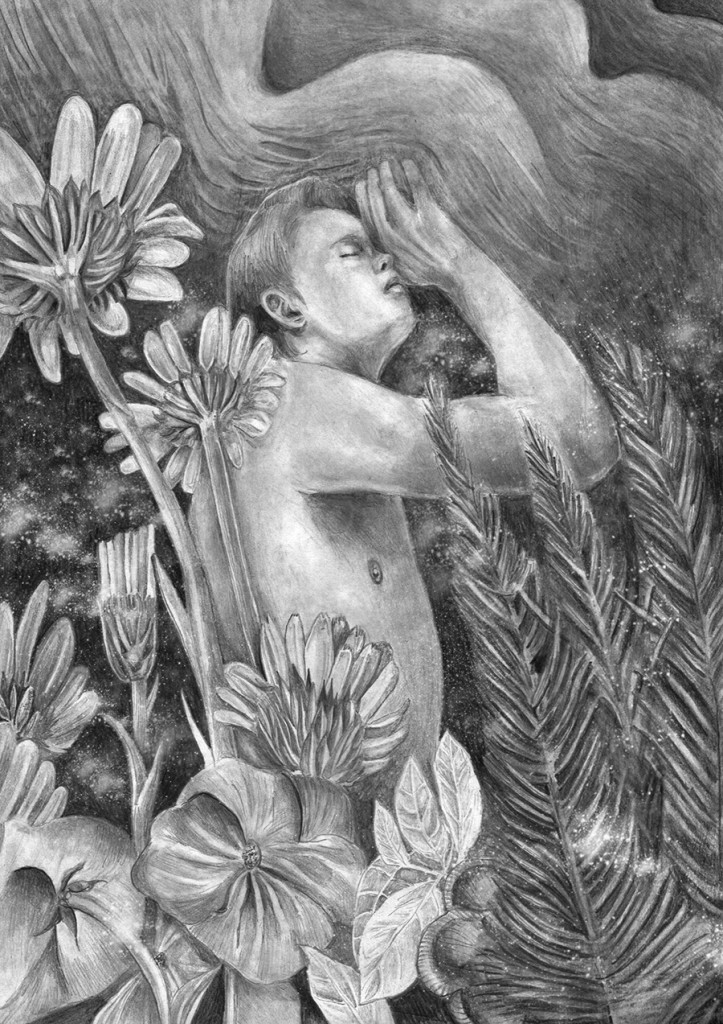 “This piece is about how I feel with my own femininity. It shows a man in a gentle, shy posture as opposed to a hunky brute. I tried to enhance the flavour by surrounding him with pretty flowers and a pretty sky. I know it’s stereotyping but I was trying to really push the idea.”

What have been some of the reactions (if any) to representations of sexuality/gender in your work? 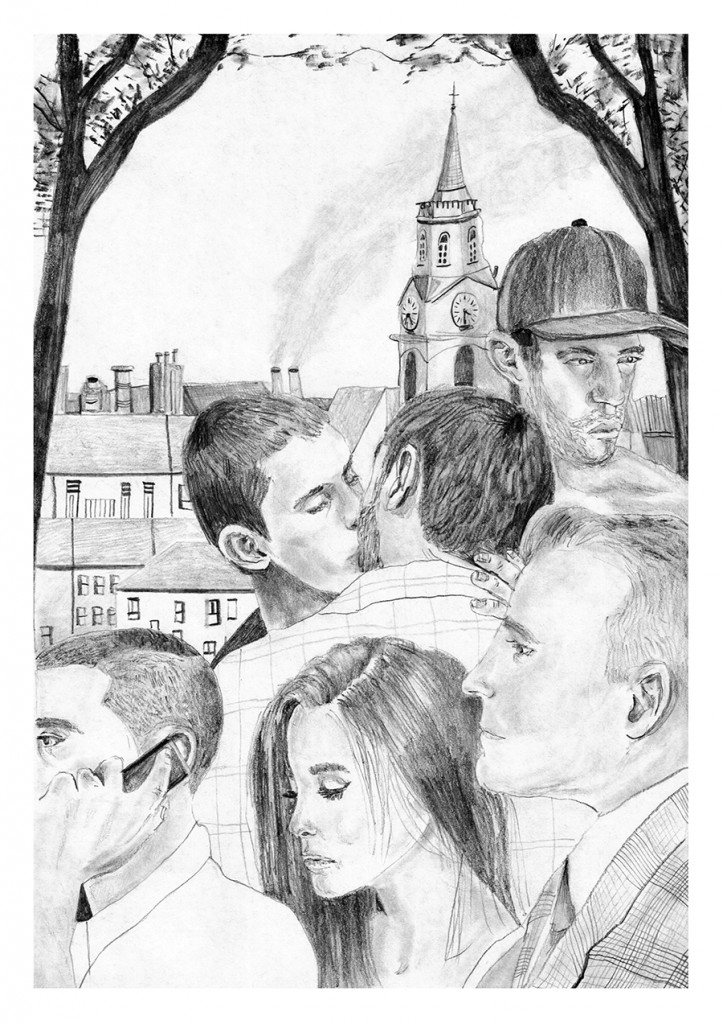 “This one displays two guys kissing in public, and no one is batting an eyelid. I suppose it’s my own ideology taking shape in my work.”

How much has the agenda of gender issues or pushing a message come up in your work?

I think studying Illustration completely opened my eyes, and it took a long time for me to realise what it meant for me. When I first started I thought I was going to be making illustrations for books. But I didn’t really know what I was getting myself into. As long as I was drawing, I was happy.
Then I think in my final year, I realised a pattern in my work. I noticed that the subjects/topics of my work linked together. This made me realise that there was more to my work than just drawing. I get HUGE satisfaction from someone looking at my Illustrations and ‘working it out’, or connecting something in some way. It’s hard to explain but all I can say is that, now, If I just draw….let’s say a cat (which I am totally guilty of I am sorry) or just an object or a portrait, I don’t feel a great sense of achievement. It almost feels like the easy way out.
I think that in order to feel proud of an image, you need to have struggled at one point about the idea and composition, almost not knowing if its going to work, but then feeling awesome when it does.

What is the message or effect you hope your work will have on viewers?

When people look at my work, I hope it makes them feel something. I suppose as the illustrator you can use your drawing as a device. If you want to make people laugh, you draw something funny, if you want someone to stop and think, you draw something thought provoking. I think my illustrations are quite sad and deal with inward emotions. I don’t necessarily want to make everyone depressed, but I want people to stop for a second, and think about something personal. It may not always be happy, but I think it’s healthy to take a step out from moving at 100mph and reflect. 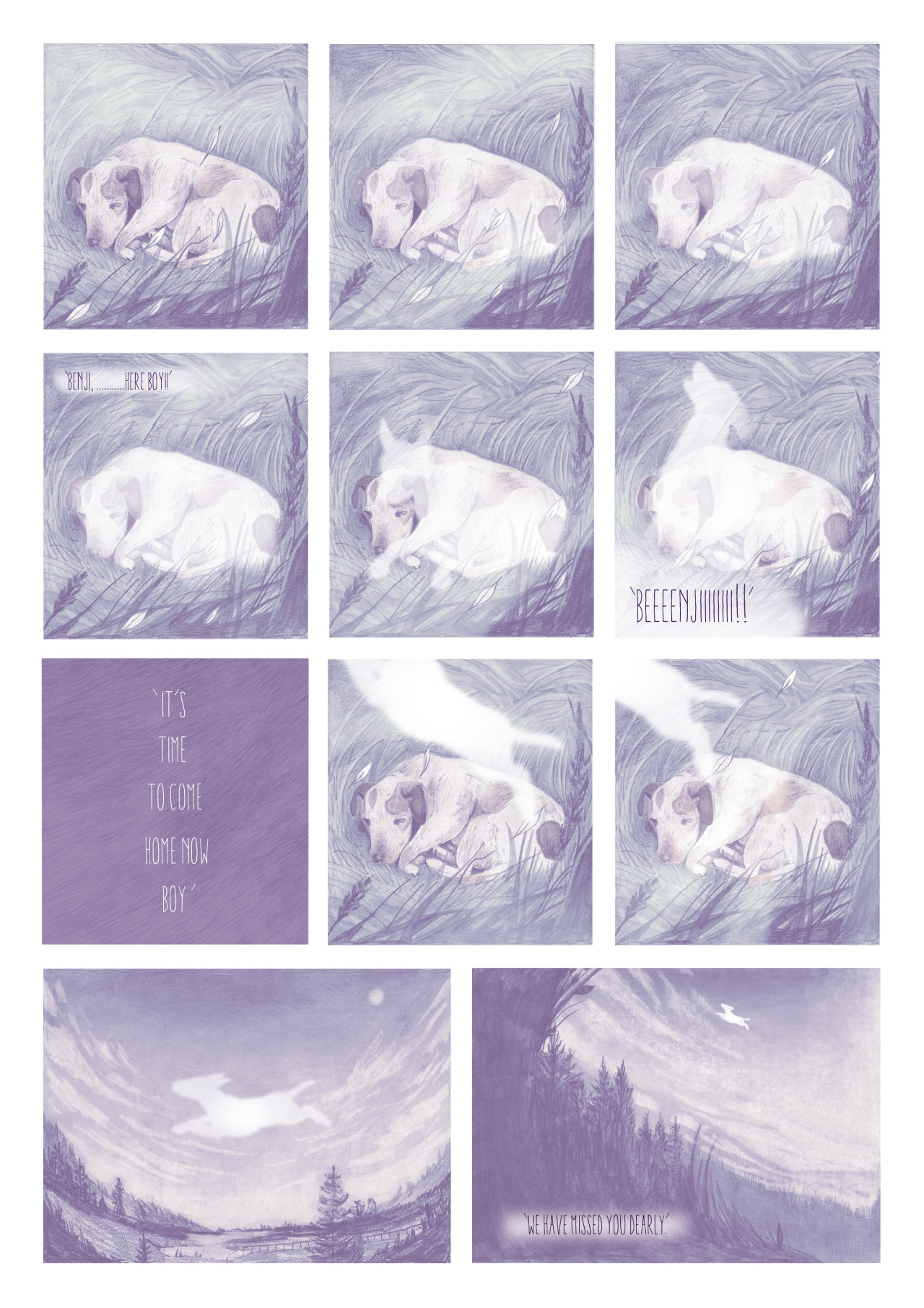 Absolutely awesome – days spent drawing Furbies, Pokemon and Sailor Moon characters with friends were top notch. When I turned eleven, I started getting into anime. It was the coolest thing I had ever seen at the time; I just wanted to draw it every day and I was convinced I would become a manga comic artist when I became older.

Why do you draw certain influences from a shared past or popular culture? Is it a turn to the nostalgic, including Furbies and Sailor Moon in your work?

I think it’s because it’s all part of my life, things that I like or have once liked. I really enjoy it in other peoples work when they reference something I love. It’s definitely something I shall continue to do and keep adding parts of my own personality into my drawings. One of my main future goals is that all my work has some kind of unified flavour: one that lets you stand back, look at twenty different drawings and know which ones are mine and which ones are not. 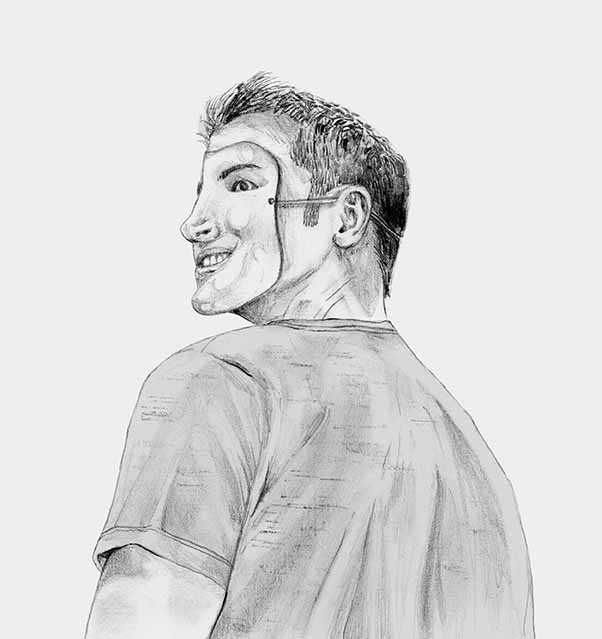 I have several of them, although they are not pretty at all. People are incredibly disappointed when they look through, as they are full of scribbles, notes, doodles and MISTAKES! I have different ones for different things, One for life drawing, one only for thumbnails and ideas, I even have a empty A4 Moleskine that I am petrified of drawing in, in case I mess up.

No, to be honest, I like to mix and match. If I buy one pencil and like it, I will try something new next time, stationery is very exciting for me so trying new things is a must. If I had to pick something for the sake of this interview, I love using my Faber Castell 9000 lead pencils in 4B.

I enjoy using my mechanical graphite stick – it’s called a ‘Croquis’ by Pilot. It allows me to make very fragile/wispy marks as well as bold strong ones. I like using my ‘Conté à Paris’ smudge stick from time to time. Other things I cannot live without would be my ‘Tuff Stuff’ eraser stick by Paper Mate, and simple Bic mechanical pencils for sketching and fine lines!

“Up”…wow that was a long time ago. 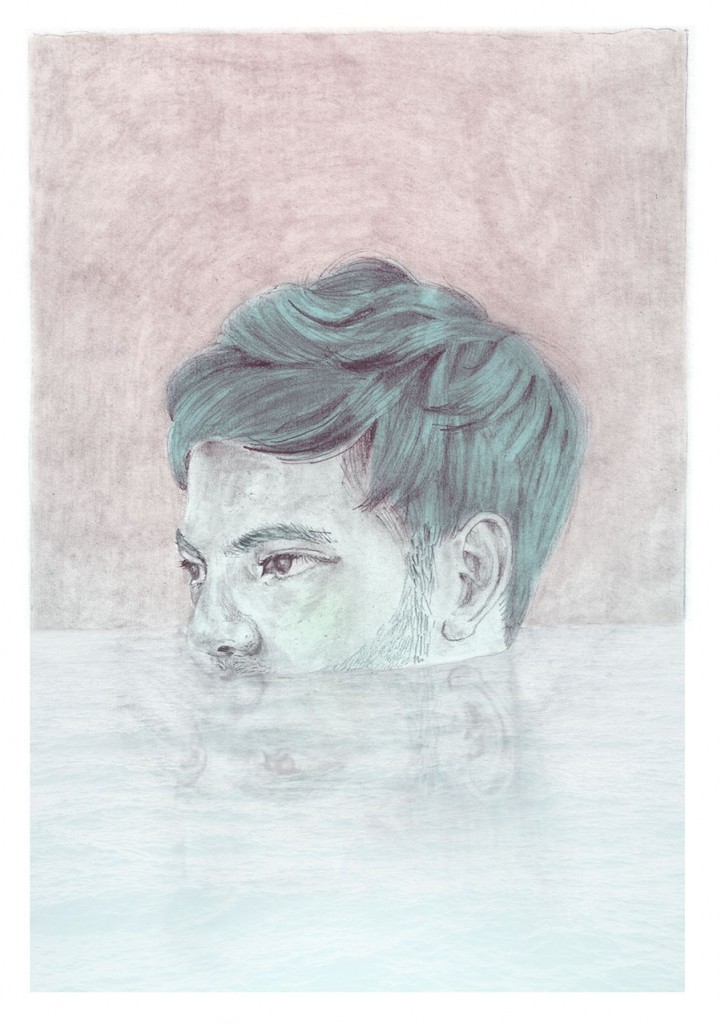 “This piece was done in response to a film called ‘Chasing Ice,’ which was about global warming. No-Wave Cinema Club showcased the film at The Quarter House in Folkestone earlier this year, and a few Illustrators contributed work for a zine that was given away for free at the event. This one was not used but I prefer it now over the one I submitted.”

Books on your bedside table?

Two books that I have not read, one is a book about graphic design called Know Your Onions. The other is a manga comic which has painfully beautiful landscape panels in it.

Does my desk count? Home is absolutely my most favourite place to draw…when it’s tidy. 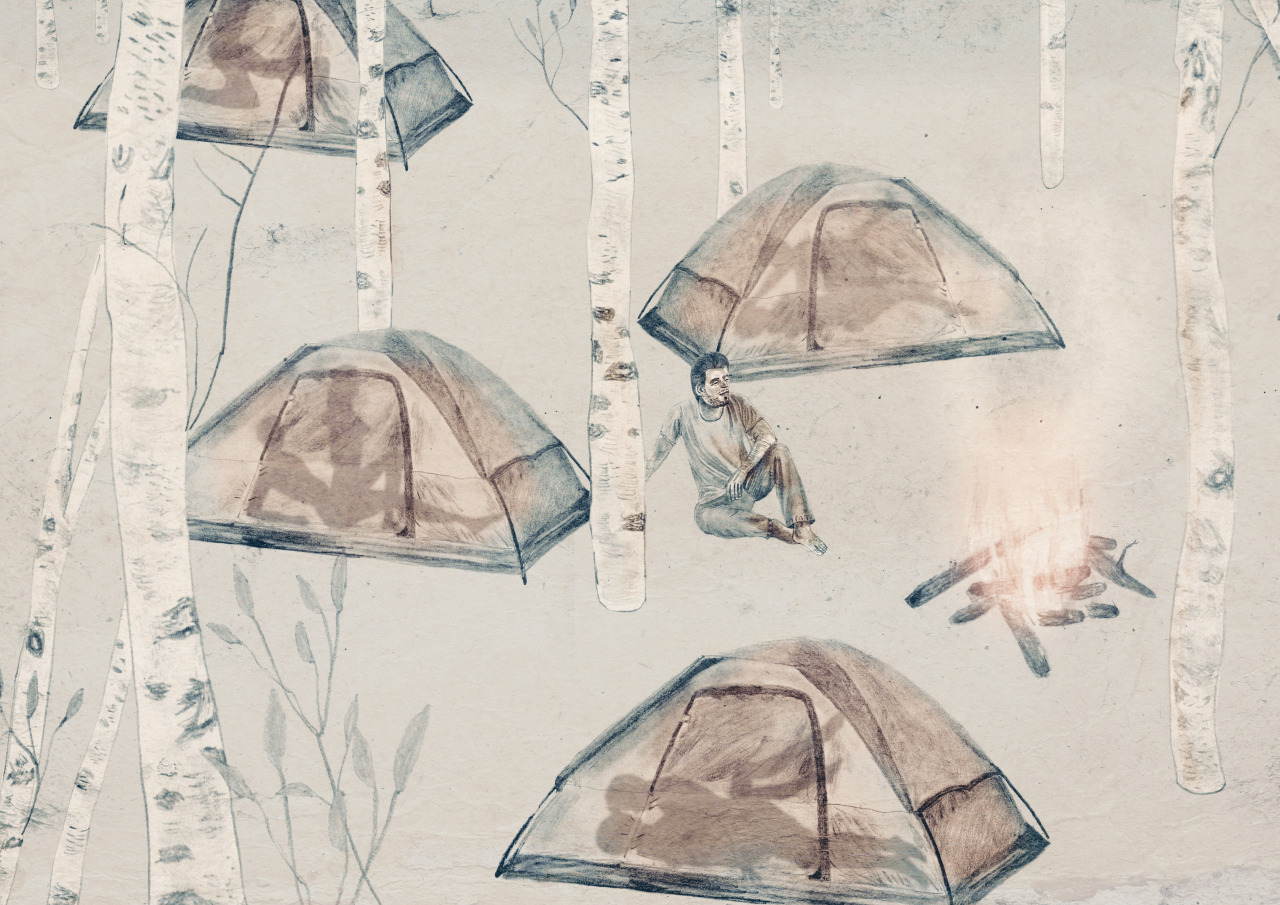 And lastly, What directions are you interested in taking your work in the future?

At the moment I am going through some kind of crisis with drawing style. It’s very fun to try new ways of drawing but very frustrating and disheartening when you cannot make something work for you. As negative as this sounds I am a trooper and shall draw one million styles to get to where I am most proud. So keep an out for new drawings on my Tumblr and Facebook page (all feedback welcome) and who knows? Maybe my illustrations will be all over articles by the end of this year or early next year! 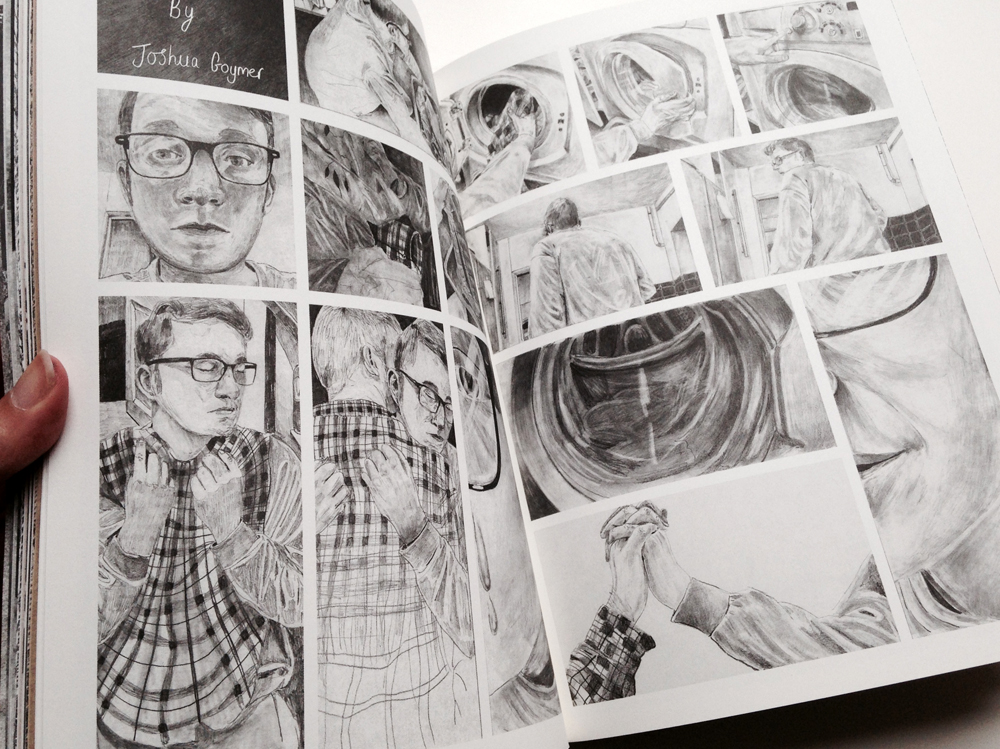 Thanks Joshua! Keep up with Joshua and see more of his work here:

This interview was brought to you by Amber Hsu, Vicky Woo, Heather McCalden, and The Tiny Pencil – fine purveyors of the pencil arts. Follow us on twitter @TheTinyPencil, Facebook, Tumblr, and Instagram for the latest news on all of our new anthology artzines.