Sarah McIntyre creates picture books and comics, and generally loves to draw and tell stories, whatever form those things take. Her award-winning books include Morris the Mankiest Monster, Vern and Lettuce, You Can’t Scare a Princess and this autumn, she’s launching the highly illustrated chapter book, Oliver and the Seawigs. An active blogger, she uses her blog to keep track of her activities and push herself in new directions: http://www.jabberworks.co.uk 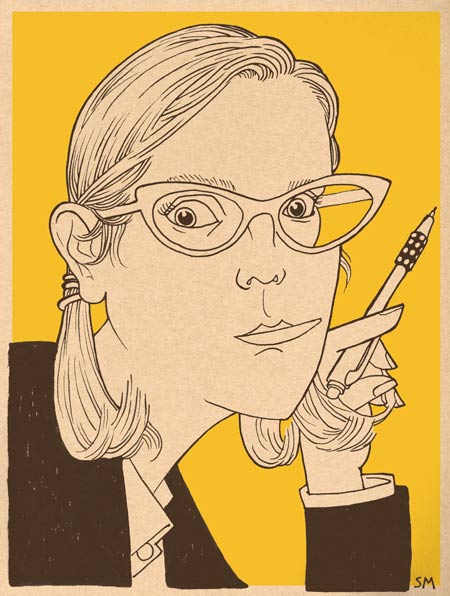 I love drawing, always have.  I’m happiest when I’m making things and I love seeing other people get excited about making things, too. I mostly work in ink and watercolour, occasionally colouring digitally, but I have a huge list in my head (and woven into my blog) of other media and techniques I’d like to try out.

Right handed. But I can draw reasonably well with my left. My left-handed pictures make me laugh, they tend to be slightly naughtier than my right-handed drawings; I don’t know why. 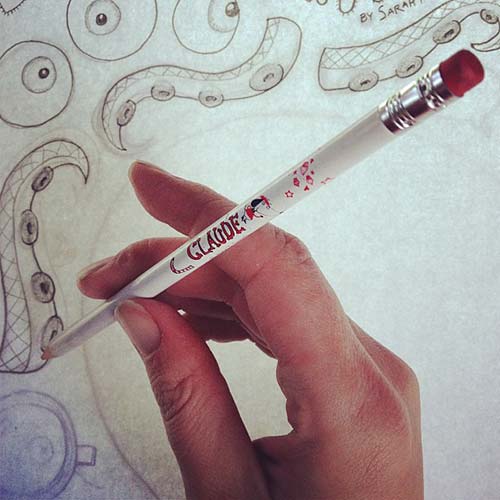 To be honest, it scares me a bit, the way pencil never ‘dries’ the way ink does. Doing these two pages was a good challenge for me, because I had to try so hard not to smudge everything. I very much had to work from the top left of the paper down to the bottom right. But I love the subtleties I can get in the texture.

For this spread, I sketched everything out very roughly, to get the layout right, then traced everything more carefully, using my light box. I wanted to use a fancy pencil, but I ended up using this Claude one that Alex T. Smith gave me, and it worked a treat. I did the Pantone green layer on a separate sheet of paper, again using the lightbox. Then I scanned both layers and laid them over each other in Photoshop. 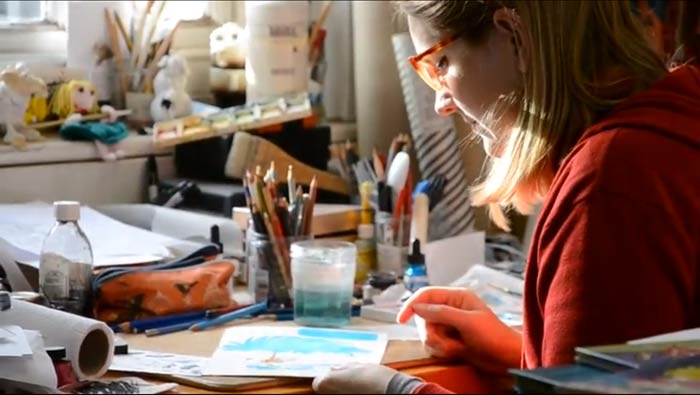 I generally tend to work at 110% of the final size, because it allows a bit of room for resizing if necessary, but doesn’t look so different to the final piece.

Do you have a favourite subject matter?  What’s the particular attraction to it?

For the past few years, I’ve been getting really into drawing trees. We have some fabulous old chestnuts in Greenwich Park, and they’re better than life models, with all their bumps and bulges and curves. Besides, they don’t wiggle, charge me money or beg me not to show the drawing to their friends. 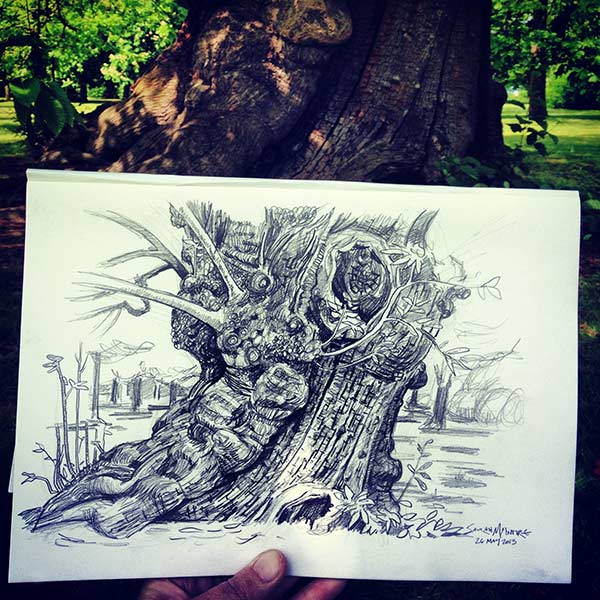 What materials do you seem to always return to?

India ink and dip pens, or Pentel brush pens are my old stand-by, but I almost always do a rough first in pencil. I’m trying not to get into a rut of always drawing a line and then filling it in. I recently heard a talk by Jon Klassen about how he HATES drawing outlines; he pointed out a picture where he couldn’t get away with not outlining the top of one character’s head, and said it nearly killed him.  That made me laugh, I get annoyed about stuff like that, too.

London, I’ve always wanted to live here. It’s absolutely impossible to get bored in London. Broke, yes, but never bored. When people tell me about how they don’t like London, I find it tells me more about them than about the city. Moscow’s a wild, amazing place, though. I lived there from 1996-98 and it was a crazy whirlwind of surreal squalor, glamour and history, all mixed up.

Can you tell us about a favourite or formative creative experience?

Hmm, I can think of several. Building a 3-D monster village at the Discover centre in northeast London was pretty cool, seeing it all take shape from the drawings I made with Ed Vere and Neal Layton. It was big enough for kids to run around and play shop in, like a mini Disneyland.  Another cool thing that happened was becoming friends with the writer and illustrator Philip Reeve through drawing landscapes (and trees, in particular) posted on our blogs. We compared notes, became friends through it, started spinning our own stories, and are now working on a four-book deal with Oxford University Press. It’s very much a collaborative venture, I love the back-and-forth sharing of ideas, and making books with a friend is ideal. 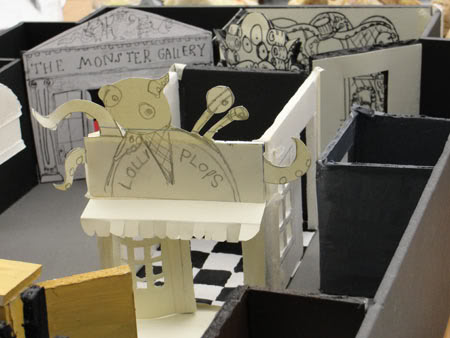 I don’t think I have one, I seem to obsess over a different image every time I go to a museum or something. Like, when I went to the Met in New York, they had this slightly creepy portrait of a girl in a red dress by Ammi Phillips, and then I had to redraw it slightly creepier, and I got onto a whole run of redrawing Ammi Phillips paintings. But ask me the next week, it’ll be something else. 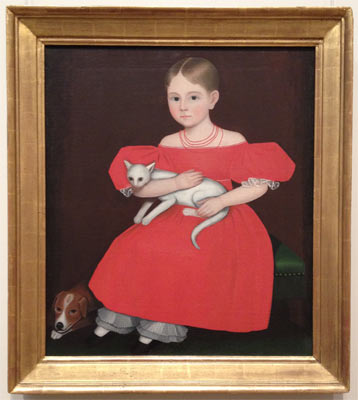 My parents were great, always having lots of art materials lying around. Here’s a photo of my sister and me, painting at the kitchen table. My family called my first drawings ‘the potato people’ because they were blobs with limbs. 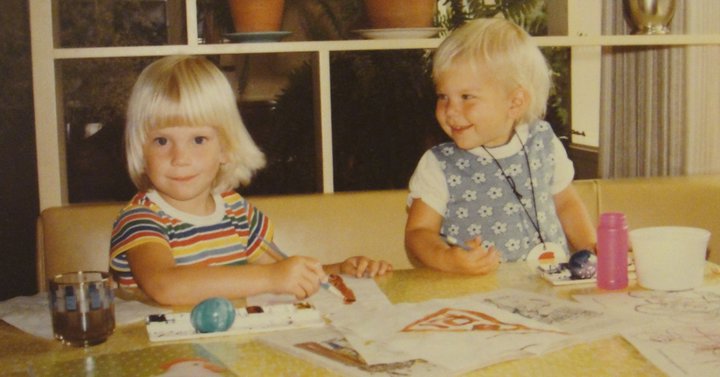 Since you’ve supplied us with the Create Your Own Monster for the Summerzine, we think it’s only fair to ask you what your favourite monster is.

Morris the Mankiest Monster, because that was the book that launched my career in Britain, and the one people keep coming back to me and telling me how much they are attracted and repelled by him. He’s a manky little dude. 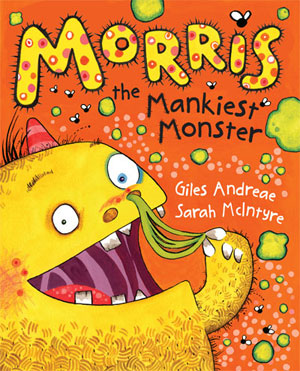 On your website you said you spent time in Russia working and studying.  Could you tell us about the kind of art and illustration you came across during this period, and what aspects of Russian style have remained with you?   Are there any major pieces you still reflect on?

There was a great movement around the late 1800’s, early 1900’s, of both folkloric images and solid, flat colours of the Avant-garde. I love the epic stories going on in the canvases of Viktor Vasnetsov and the bold play of colour in Vassily Kandinsky’s drawings and paintings, particularly some of his earlier work when he was still moving between folkore and abstract images. I think my own work is very influenced by European ligne claire comics, and Ivan Bilibin’s work is a sort of Russian version of that, and I’m fascinated by his use of color and folkloric pattern.

Your bookwork seems very food driven, particularly You Can’t Eat A Princess.  Would you mind telling us how flavours impact your ideas?  Could you tell us what your favourite dessert is?

Well, that’s the fault of my writer, Gillian Rogerson. But I had such a lark setting the princess in a world made entirely of sweets. When I was a kid, I remember the pictures of nice food in books always held me longer than most things. My favourite dessert… hmm, probably home-made blackberry pie; not too sweet, with vanilla ice cream.

Out of all your characters, who is your favourite?

Probably Vern and Lettuce. Even though he’s a sheep, Vern is based very much on my husband, Stuart. He’s a sweet, generous character, and his foibles make me laugh. 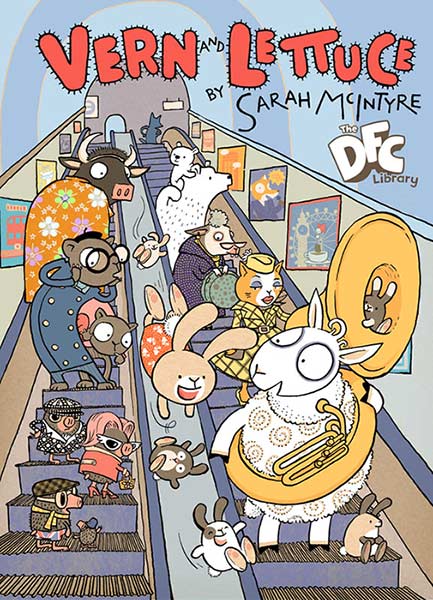 Just how super is Superhamster?

Superhamster thinks he’s WAY more super than Superkid. I mean, any ol’ kid can be a superhero, but it takes a hamster with true grit to don a cape and commandeer passing spacecraft.

Do you find pencil magical?

Yes, but I wish it didn’t smudge so much. Someone please invent a pencil that doesn’t’ smudge.

Sort of. I don’t have beautiful albums of drawings, like Dave Shelton does, but I have hundreds of cheap Seawhite sketchbooks filled with rough scrawls with the occasional good one in between. My first drawing is usually more of an exploratory exercise, and the second drawing is where I’ve gotten to grips with the image and I can focus on the line, texture and tone. So a lot of my first drawings are done on rough bits of printer paper, then traced, and I usually chuck out the first scrawl and keep the second drawings in transparent sleeve folders.  Muji sell good ones. I also love taking photos of the drawings kids make at the end of my stage events. They come up with the funniest stuff. Here are some great pirates: 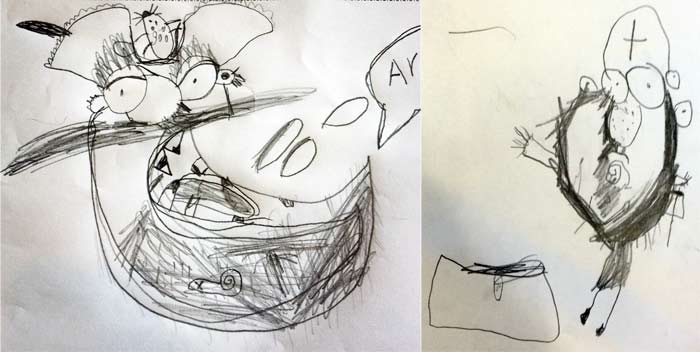 And here’s the start of a family comics jam, with each of us drawing a different panel. So much fun! 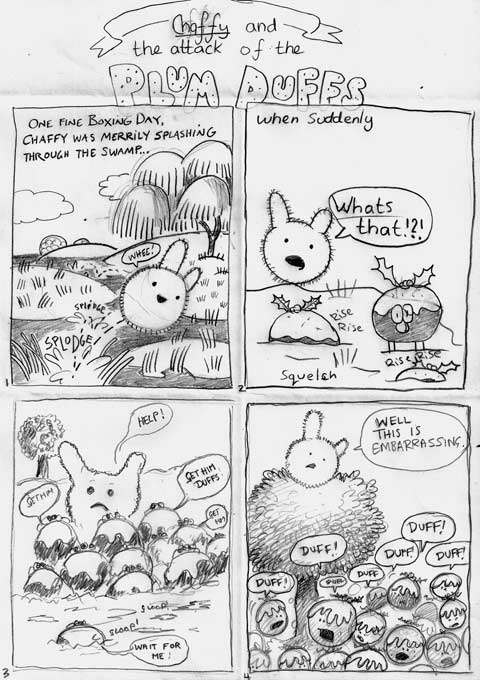 I’d really love to do some series of lino cut prints. But not as a commission, they take a long time and half of the fun of them is not knowing how they’ll turn out. I don’t want to play with too much risk when I’m on a tight deadline. I’ll do them when I do them, maybe start getting up earlier again. I did it for awhile, it was ace. Here’s one I did right there in Greenwich Park: 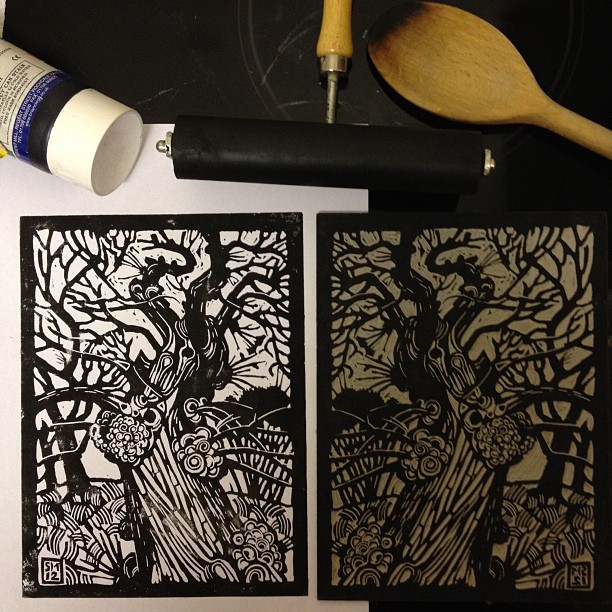 And another I did for a BBC Jubilee show with Rolf Harris: 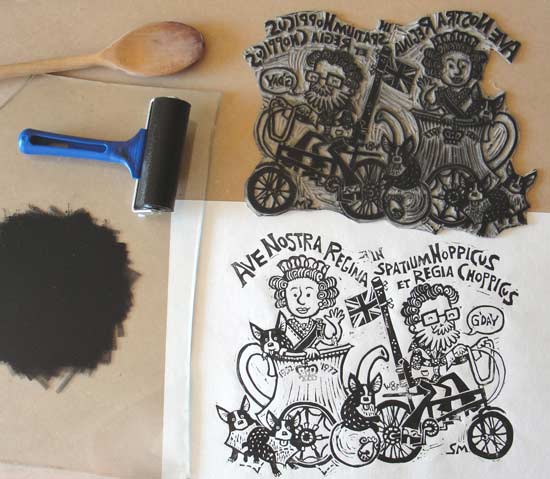 I’d also like to do more comics, experiment with different techniques in picture books, maybe design sets for an opera some day. I’ve recently been getting some amazing offers that I haven’t had time to take up and it’s exciting but also intensely frustrating, having limits on how much I can do.

Oliver and the Seawigs is going to be amazing, really looking forward to that launching soon. And next spring Scholastic will launch a picture book I’ve written and drawn, called There’s a Shark in the Bath. That was loads of fun, drawing BIG TEETH. Right now I’m working on a new picture book for David Fickling Books and the second OUP book with Philip Reeve, this time set in space. 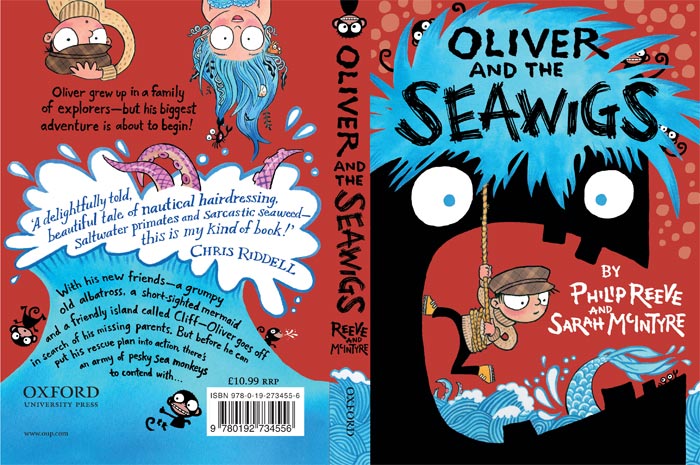 Ha ha, I’m ALL OVER the Internets, just Google me and a zillion things will pop up. My website and blog are the best places to start. When I make a book, I like to create things to go with it, so kids and adults can use the book as a starting point for their own creations. So there are lots of activity sheets, drawing tutorials and other activities on my website.