Soju Tanaka is an illustrator and comics artist who lives and works in Japan and studied in the UK.

Hi Soju! Could you tell us a bit about yourself and your work?

I moved to London in 2006 to study at Camberwell College of Arts. After finishing BA (Hons) Illustration in 2010, I was working as a freelance illustrator. I did illustration for magazines and joined art events such as Elephant Parade London 2010 and ELCAF. Moved back to Japan in 2012. I love the chuckles of people at my works, and it’s my purpose of creation. I like drawing weird creatures and making little queerness with them, and try it in any medium.

Your work is usually in pen, what appealed to you about working in pencil for your Tiny Pencil contribution?

This opportunity reminded me the unique quality of pencil lines and that I love it. Its unintended line is one of the things fascinating me. Also I found that the surface of the table affects the pencil drawing lines a lot more than pen drawing. 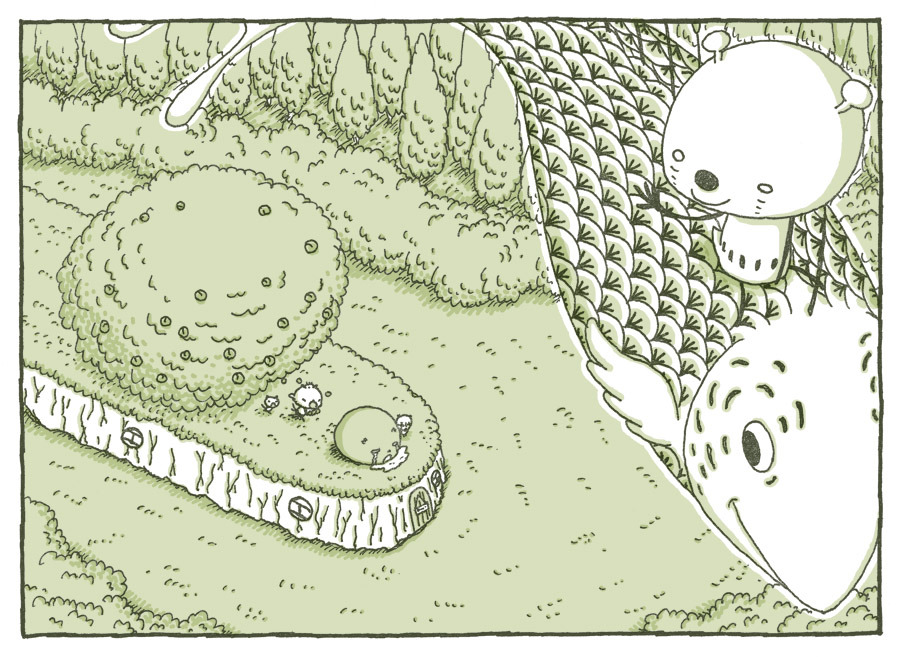 Think the idea in my mind. Draw it roughly with pencil while refining the idea. Draw with pencil and then with pen on it. Sometimes colour the drawing with Photoshop, paints, or markers.

I create a story about the character even short and if I can feel it’s funny/happy, it’s a good piece. 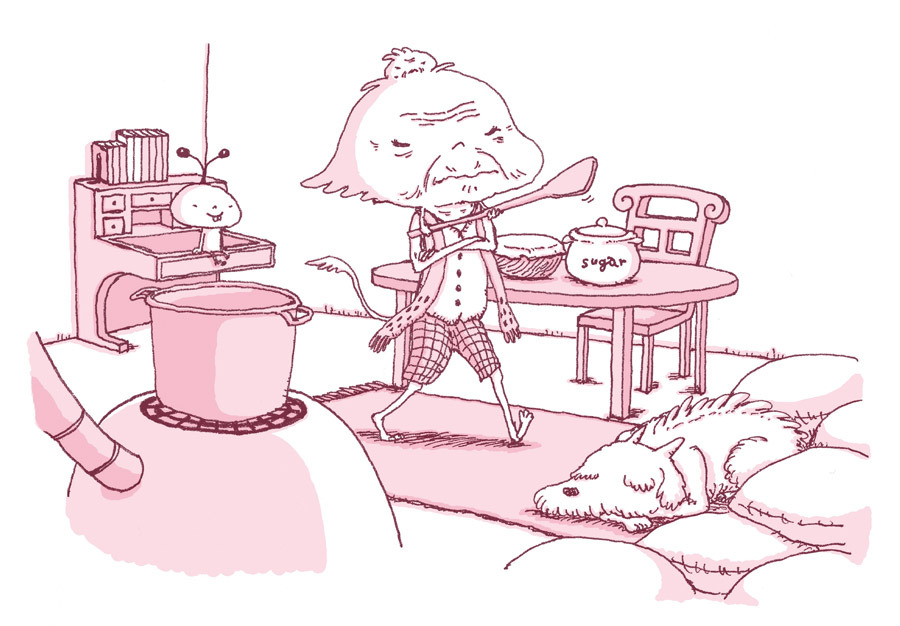 Nothing at the moment. 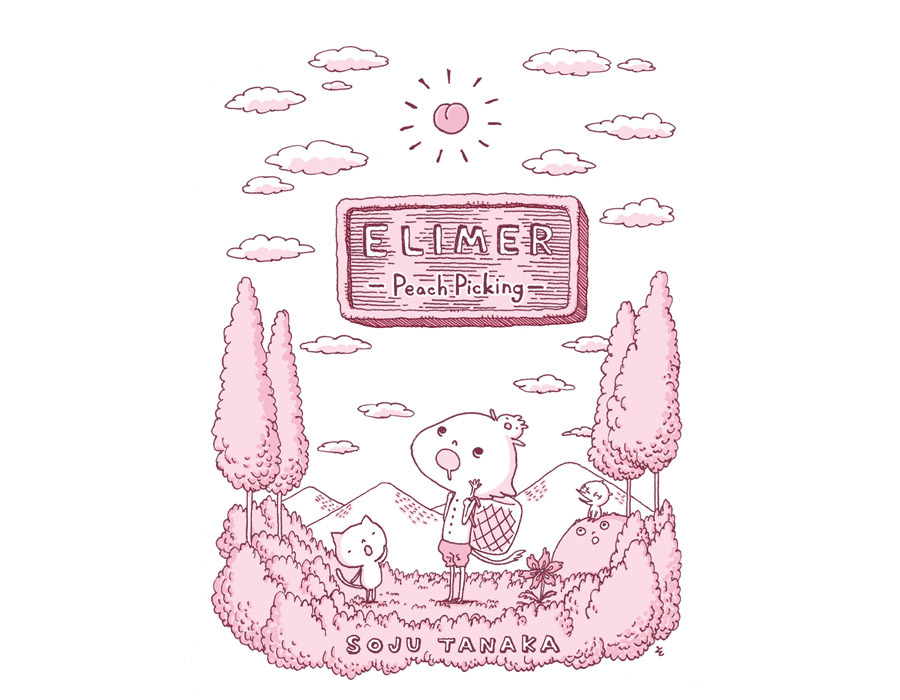 I first came to your work when you were publishing an Elimer comic strip every day on your blog. What was it like putting out work on such a regular basis? How did the Elimer character come about? Did you have his story planned out from the start or did it develop as you drew it?

I started drawing it everyday after I had an interview with a creative director. He gave me an opportunity to send him any work everyday by email. I was thinking to do comic then so started one-page-comic a day using the character Elimer. That was a really great opportunity for my experience. I still send him a drawing everyday.
I had drawn Elimer comic already before doing it everyday. Elimer was born from my doodles. The first one looked different but he already had small arms on his neck. I decided to make a specific character with it. After some trial and error, finally Elimer was born. 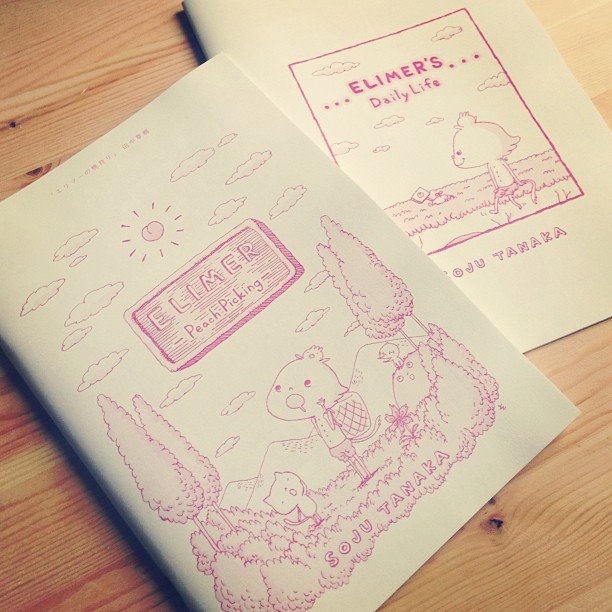 What size do you tend to work at? Why this preference?

I usually use Moleskine sketchbook large size (13x21cm) so that size is my main canvas. I don’t often draw large as my hand and arm move small. Maybe that’s because my home where I grew up was filled with so many (nice) stuff and I couldn’t have much space to draw.

You’ve worked as part of a collaborative team called Collemoki. How did that collaboration come about and what’s the story behind your ‘Marsupials’ series?

The start of collemoki was that Natsumi helped packing my badges. I made badges which are many different designs. She arranged them into sets of 4 while thinking stories from the random designs. The idea became collemoki’s first product ‘Narrative badges’.
The idea of ‘Marsupials’ was from my old character ‘Marsupial Gnome’. I like marsupial animals and thought it’s funny if the pockets are like human clothes’ pockets. I didn’t use the character a lot but Natsumi liked the idea and developed it. We made various characters who have pockets on their belly. 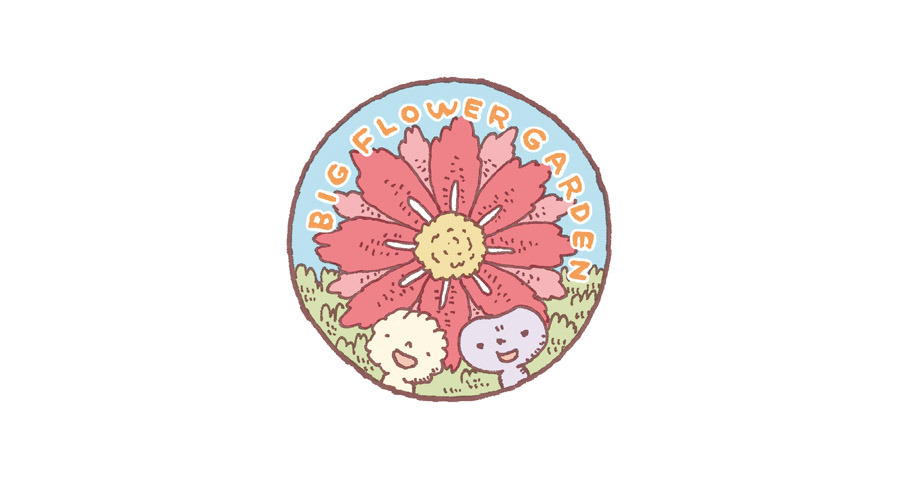 Contributing ‘Elephant Parade London 2010’ was an impressive experience. The project was a charity working to save the Asian elephants from extinction. Over 200 artists painted their designs on elephant sculptures and 260 of them were installed in public places throughout London. Mine were at Hanover Square off Oxford Circus and in front of High Street Kensington Station. It was a great opportunity to draw/paint on large 3D canvas. I had never drawn my character in such a large scale. Also it was so difficult to apply 2D design onto 3D material. I learned a lot from the project.

When I was a child, I always drew anywhere at home, nursery school, and friend’s house (using reverse side of flyers). Often copied manga characters.

You’ve spent time in both Japan and the UK… how do you think living in these different countries has played into your work?

I don’t know how those different experiences have affected my work by myself. My work certainly is different from before I was living in London but can’t see what it is specifically. I guess it’s the thing that you will realise in future when you reflect what you have done.

I’ve been doing ‘one drawing a day’ after finishing Elimer for about a year. The idea is picking up a sentence and drawing a picture from the words. I do that everyday but not doodling a lot recently except that. 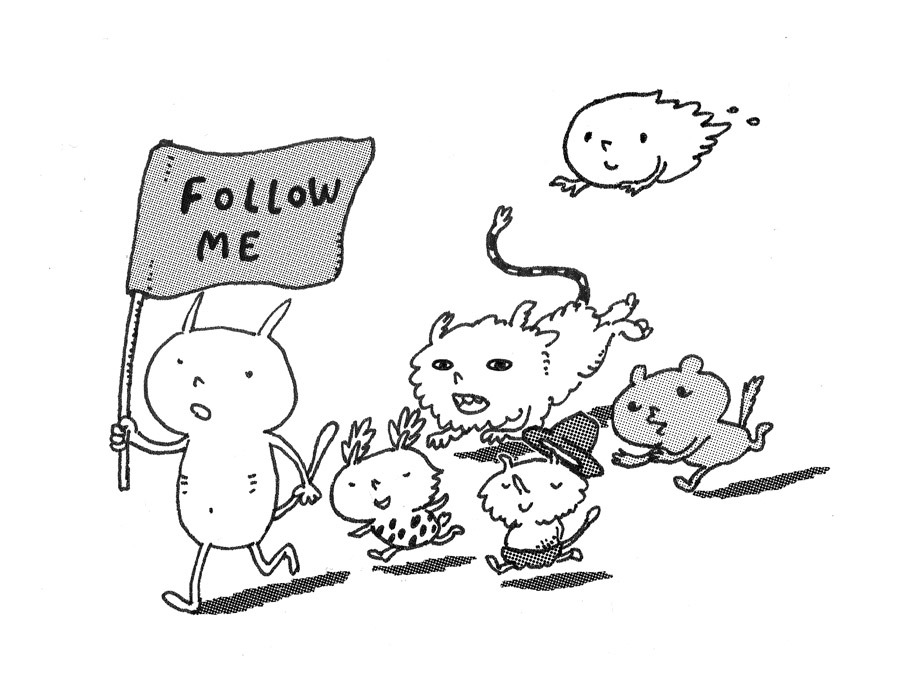 I don’t really decided specifically but something relating to ‘book’ is always important to me.

Working on the project for the next exhibition. The theme is ‘4 Seasons’. I’m planning to make next year’s calendar.

My website (www.sojutanaka.com) and blog (sojutanaka.blogspot.com) for the previous works. Please see Facebook and Twitter for the latest works and news. Also my zines are sold at some shops in London. 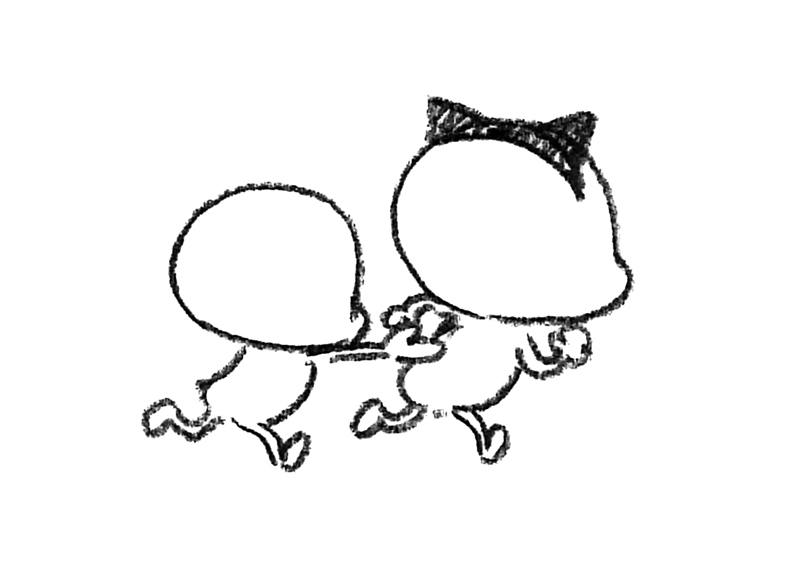 Soju’ work appears in Issue 2.0 of Tiny Pencil, the summerzine Monsters, Mammals & Mars! Available to buy here. This interview was brought to you by The Tiny Pencil – fine purveyors of the pencil arts.